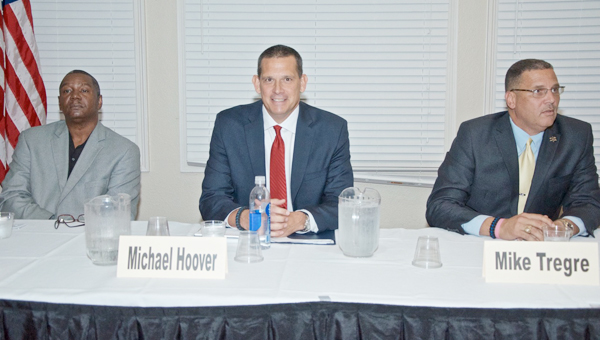 LAPLACE — Three of the four candidates for St. John the Baptist Parish Sheriff passionately battled it out in front of a sometimes-raucous crowd Thursday night during a political forum hosted at Belle Terre Country Club.

Clifford Bailey, Michael Hoover and incumbent Mike Tregre spoke to the public, discussing safety in the parish and ways to prevent crime in front of a crowd estimated at more than 350 people.

Candidate Samantha Wilson was not in attendance.

When asked what their qualifications were for the position, there was a wide array of answers.

Hoover believes his 25 years of service make him the right person for the job. “I was known as the man who can get things done,” Hoover said. “That’s who I am, and that’s who I’m going to continue to be as your sheriff.”

Tregre said his record on the job proves he is fit for the position.

“I ran for sheriff four years ago to make a difference, and I think I’ve done that,” he said. “I have a good department, and I’d put them up against anybody.”

Each candidate had 90 seconds to respond to prepared questions.

The first was whether they thought the people in St. John the Baptist Parish felt safe. Bailey and Hoover agreed the parish is not safe, but Tregre disagreed.

“Talk with the people of the community, walk the streets,” Bailey said. “Talk with your neighbors. It’s not safe. We need leadership that is not part of the system, but from the system.”

Tregre disagrees with his former employee on his idea of a specialized unit.

“One protective unit to protect St. John, really?” he said. “They have to go home. They have to go to sleep. I want every officer to be highly trained, highly skilled and highly motivated to do the job of a group of guys. I don’t have a specialized unit and the (violent crime) numbers are lower. We’ve only had three homicides this year.”

Tregre said he believes he has instituted different measure throughout his time as Sheriff to keep people safe.

“I meet with all of the sheriffs in the metro area almost monthly,” Tregre said. “I copy and paste what’s working out there and what’s not working out there. Every time I see something that I can bring back to St. John Parish, I bring it back. I have a brand new bicycle patrol, and they have been out there doing a tremendous job. When we have a burglary in a neighborhood, we put out door hangers in the neighborhood. We have a crime map system where you can log on and see everything that’s going on. We also have an app. You will know everything that is going on under my administration. I’m completely transparent, you’re going to know the good, the bad and the ugly.”

Bailey feels the Sheriff’s Office shouldn’t wait for something to happen to put out door hangers.

“We aren’t proactive,” he said. “We wait for something to happen to do something. We need to get back to the basics.”

Hoover said the Sheriff’s Office must support educational systems that reach all levels.

Early voting for the Oct. 24 election takes place today through Oct. 17 at the Registrar of Voters Office inside the Percy Herbert Building in LaPlace and at the Edgard Courthouse.

St. John rallies for Night Out Against Crime