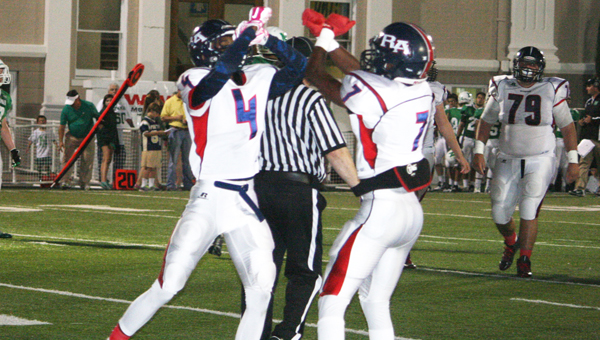 Von Julien and Darrion Cook celebrate a touchdown during the Rebels victory over Newman Oct. 17, 2014. The two teams will play again Friday.

RESERVE — The Riverside Academy Rebels (3-1) will face off with an old foe Friday night in their first district game of the season.

“The extra week of practice gave us an opportunity to work on some things,” Riverside football coach Bill Stubbs said. “We worked on basic stuff, things that may get looked over during the course of a week. We are just going back to the basics. It’s what we wanted to accomplish, and I think we succeeded in doing so.”

Going back to basics may be just what the Rebels need to secure their fourth victory in as many years against the Greenies. RA overwhelmingly defeated Newman last year 55-14.

Stubbs is confident the Rebels have no need to worry about being rusty.

“We worked hard last week (practicing) and got the things done that we needed to get done,” Stubbs said. “I’m feeling pretty good about that. Now we’re back in a regular week. We’ve never really had an issue with getting rusty. I think we gave our guys a little time to freshen up. It’s a good time to get ready to start district now.

“If you break this thing down, you can break it down to a couple of phases. We played the first phase. We took a little break. Now we’re going into the second phase.”

District 12- 2A teams are on a good run this season with Newman undefeated and Riverside only losing its first game by one point.

“(Newman) is 4-0,” Stubbs said. “They’re playing really good football. They are well coached. The Lapeyre kid is their quarterback. He is in his second year and has improved a tremendous amount from last year to this year. They have a good, solid program. They play well and they play hard. They have a lot of confidence right now.”

Stubbs said this matchup is going to be a challenge, just like every week is a challenge.

“I’m more concerned about who we are than who they are,” Stubbs said. “I don’t care if we’ve beaten them before. Every game is different. The opportunity to play a football game only comes around once a week. You’ve got to play your best no matter who your opponent is. I look at it as another challenge in a weekly mode of challenges

“We can only control us. We can’t control Newman.”

Stubbs said he is expecting great play from everyone on the field.

“We’ve got Jared Butler coming back this week and he’ll help us,” Stubbs said. “This will be the first time he plays quarterback all year long after coming off of an injury. We certainly want to see how he responds. But that’s also contingent on everybody else. From an individual perspective, everybody’s got to do what everybody’s got to do.”