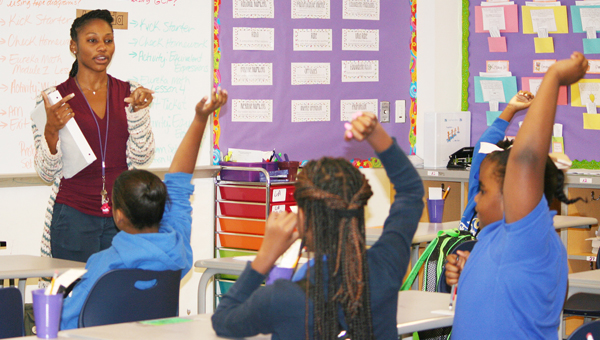 EDGARD — West St. John Elementary School recently inducted 19 members into the newly formed Jr. Beta Club with a goal of building leaders in the school and helping the community beyond campus.

Kentralyn Montgomery is serving as the club’s sponsor, an assignment from Principal Chantell Walker she was excited to tackle.

“I was in Beta Club in elementary school and all through high school,” Montgomery said. “I knew I liked it, and I wanted to give the kids the opportunity to do it and teach them what the club was about.

“It’s a leadership organization. We are leading by serving others. That’s actually the motto of Beta Club.”

“We are trying to help them be better leaders and serve others,” Montgomery said.

Students have to be invited to join the club and are chosen based on their GPA, which must be 3.0 or higher.

“If they get a C within the first nine weeks, they need to bring it up,” Montgomery said. “They need As and Bs.”

“I hope the club helps students and organizes other clubs to get together,” she Vontoure said. “We get to have fun and learn stuff at the same time.”

She said she joined to help with her grades and stay focused. Kayli encourages more students to join.

So far, Montgomery says her members are enthusiastic about community service.

“We are trying to have a monthly focus every month,” she said. “This month we are focusing on our school. The members help the teachers, other students that need help through tutoring and help set up the science lab.”

Another focus will be the elderly. Montgomery said members want to visit nursing homes and possibly perform a talent show for the residents. Starting a community garden is also being considered.

Hours members complete through service are logged to show what each member has done. If a member wants to apply for a Beta Club scholarship when they are older, the hours they worked are needed.

“(The students) love helping and they are active members,” Montgomery said. “Even though you have to be selected, it influences other students to want to be invited. It’s not just about helping others; it’s about being a role model. With keeping up with their grades to stay in the club, it’s like an encouragement to do better.”

She feels the club teaches members to be better students, better citizens and better people.

When she was a member growing up, Montgomery said the club influenced her in many ways.

“I was kind of shy, and Beta Club did help me be more involved in the community and with others,” she said. “By high school I actually ran for state treasurer. I didn’t get it, but I think it helped because I was able to be a role model and I was able to help others. It was also a good way to stay focused grades wise. You like being a part of something and you want to stay a part of it. So, I kept my grades up to remain in the club. I had a lot of fun.”