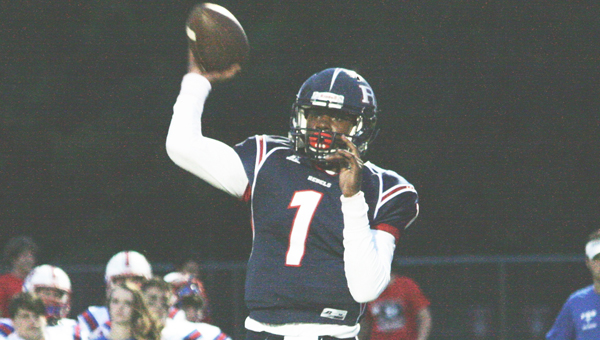 Herb McGee has been seamless in switching over to the quarterback from his natural position as a wide receiver. (Kyle Barnett/L’OBSERVATEUR)

In what figure to be one of the best matches in the state, the Riverside Academy Rebels (1-1) face off against the Hahnville Tigers (2-0) Friday.

The Rebels are coming off of a big 27-19 win over Parkview Baptist last week and are hoping to keep the momentum going.

“We are seeing really good football teams, and each week we go, it gets to be better and better football teams,” Riverside Academy head coach Bill Stubbs said.

The Rebels will have their work cut out for them in facing off against Hahnville. The Tigers were semifinalists in 5A last year.

“We are going up against the best football team that we are playing on our schedule this week by far,” Stubbs said. “They are big and strong and physical and fast, and they are well coached. We have just got to handle what we handle. We are not going to get fancy.”

On offense, the Tigers are a run-heavy football team with a number of weapons at the running back position. However, perhaps none are more dangerous than sophomore running back Anthony Williams.

Prior to his sophomore season, Williams was offered a scholarship by Tulane University. In last week’s matchup against Patterson, Williams scored on a 61-yard screen pass and a 1-yard rushing touchdown.

“They are a run-oriented football team,” Stubbs said. “They’ve got big guys up front and with screen and stuff like that, they have certainly shown the ability to throw the football well. They are growing by leaps and bounds from one game to the next.’

The Tigers have playmakers on the defensive side of the ball, as well.

“They play really good assignment football, and you are not going to confuse them,” Stubbs said. “They’ve got good football players all across the board.

For the Rebels, Herb McGee will get his third start at quarterback. McGee has played well over the first weeks of the season after being forced under center due to injuries to two of the team’s quarterbacks. So far McGee has thrown for 4 touchdowns and rushed for another.

Running back has been another strong point for the Rebels offense, with Brandon Sanders rushing for 181 yards with two touchdowns in the first two weeks.

In traveling to Hahnville, Stubbs said the Rebels will have their hands full.

“They are really a very good football team,” Stubbs said.

“They are doing some good things. It is going to be a tremendous challenge for us.”

Riverside Academy will travel to play Hahnville at 7 p.m. Friday at Hahnville High School in Boutte.

The West St. John Rams (2-0) will play their second home game of the year against the Southern Lab Kittens (1-0).

While Southern Lab is a diminutive 1A school, West St. John head coach Brandon Walters is not worried about their size, but the talent on the Kittens roster.

“They are 1A in numbers but they have some pretty select guys that are over there and can get the job done for them,” Walters said. “They are ranked No. 1 in the state in 1A.”

Walters said the Kittens are one of the better teams they will face this year.

“They seem to be a smash mouth type team,” Walters said. “They are going to come straight at you and play some real sound football. It is going to be a tough challenge for our guys..”

The play of Kittens quarterback Bladrick Veal has stuck out for Walters.

“On the offensive side of the ball, the quarterback is a good athlete,” Walters said. “(Veal) can throw the ball well and get it to those receivers.”

To go along with Veal, Walters said the Kittens have a huge offensive line with a strong right tackle.

Southern Lab’s ability has seen the school best larger opponents. In week 1, the Kittens shut out 3A Bogalusa 35-0.

On the defensive side of the ball, Walters said 6-foot-3, 248-pound defensive end Deion Rainey controls the action.

“(Rainey) is a force to be reckoned with,” Walters said. “He is all over the field. Everything goes through him as far as getting the stops when they need them. He is a very physical kid and likes to fly around and run to the ball.”

In the face of the talent apparent on the Kittens’ roster, Walters said his team will stick to their game plan more or less.

“We make adjustments from week to week as far as what we want to see against different teams and the looks they give us,” Walters said. “But we are going to pretty much run our style of offense and try to attack the weaknesses they present.”

Walters said the Rams game versus the Kittens will be a measuring stick.

“The guys are looking forward to a challenge and want to see how we measure up against a quality team and a quality program,” Walters said.