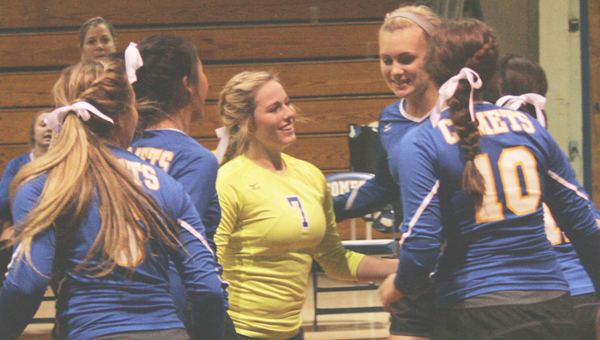 LAPLACE — St. John the Baptist Parish private school volleyball programs have been catching up in week two of the volleyball season after a rocky start.

After coming out to a 1-2 start in the first week of the season, the Lady Comets put in an even record in week two, including a 2-2 appearance at the 8th Annual South Louisiana tournament in Baton Rouge.

“We played one 4A and the rest were 5A schools,” St. Charles Catholic head coach Meghan Ericksen said. “Overall, we played well.”

“We worked on some team building, and I think we have really worked hard since then,” Ericksen said. “We are learning how to finish and come back from being down a couple of points and learning how to push past the point of our errors.”

While playing six games in as many days is tiring, Ericksen said the work will be worth it in the long run.

“The players are all worn thin but we are trying to get them all conditioned enough too last five games so when we get into district we will be able to outlast our opponents,” Ericksen said.

St. Charles Catholic next plays Tuesday at Academy of Our Lady in Marrero. In the meantime Ericksen said her team will take advantage of the four-day break to get back to work at practice in preparation for the match.

“We are going to be looking to get our quick game going well and be able to pass the hard serves and overall working on the little mistakes that we create ourselves, so we are not giving them any points and they are actually working for it,” Ericksen said.

The Riverside Academy Rebels bounced back from a rough start this week with a loss to Ponchatoula by earning a win over Landry-Walker.

The Rebels turned in their third straight loss of the season against Ponchatoula on Tuesday in a game that stretched to five sets.

The Rebels made 47 hitting errors in the game.

“They really only earned one set that they took from us,” Frederick said. “We gave them the other ones. It was our side of the net and we’ve got to get more consistent and make better decisions.”

Part of the issue, according to Frederick, was a new starting lineup, including several underclassmen.

“We were trying a new lineup,” Frederick said.

“I knew it was going to be interesting because we had only prepped for it for one day.”

“This was a much needed win for our team,” Frederick said. “We spent our practice (Wednesday) focused on the positives and being better teammates by offering compliments to each other. The girls said they practiced those same skills (Thursday) and it had a strong calming effect. We also made much better decisions offensively, which led to fewer errors. We are looking forward to seeing how much better we can get.”

Beginning with Landry-Walker, the Rebels enter a two-week stretch in which they play several games back-to-back and only have a few days off.

“We are playing all of the time and we are not having much practice time,” Frederick said. “We are practicing once or twice a week, which is not enough. That is why the offseason and club is so important. Once you get into it, it is just grueling, but if you don’t play your matches you don’t have you power ranking points.”

Still, Frederick said she feels the tough schedule will be good for her players in the long run.

“I think we are still going to have success and I think we are learning every night,” Frederick said. “We are so young, we keep on getting on better.”