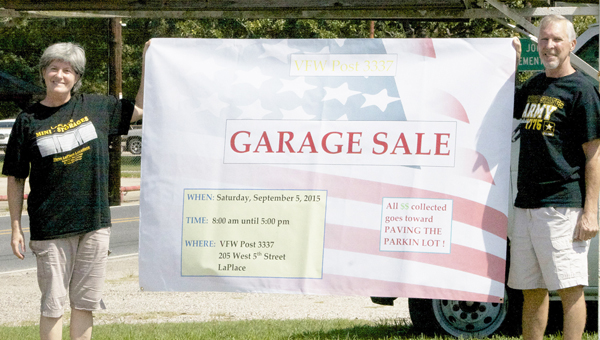 LAPLACE — The local Veterans of Foreign War Post has been helping the community in St. John the Baptist Parish for years, and now members are seeking public support for the Post.

“Under Ray Bass’ leadership, our VFW is the No. 1 post in Louisiana for community service,” VFW house committee chairwoman Maria Victoria Coy said. “We aren’t wealthy in money, but we are wealthy in heart.”

LaPlace VWF Post 3337 is made up of 462 members who were in combat in foreign wars. The organization’s auxiliary group is made up of 18 individuals who are family members of someone who was in combat.

The VFW helps veterans down on their luck secure temporary housing while providing phone cards and gas cards. Members also go into local schools to teach students about democracy and the role of veterans.

During the holidays, members make baskets full of food and pass them out to the homeless and other people in need.

VFW members donate the money they raise to community causes, but Post Commander Ray Bass said their current focus is on a major infrastructure need.

Post members are trying to raise money to build a new parking lot.

To raise the money, the VFW is hosting a garage sale at its LaPlace building, starting at 8 a.m. today at 205 W. 5th St.

Along with items at the garage sale, supporters can also purchase hot dogs and drinks on site.

Money raised will go toward building a new parking lot at the VFW hall. The type of parking lot depends on how much money is raised.

According to Bass, contractors estimate the new parking lot will cost $50,000.

“I didn’t know a parking lot could be so expensive until we saw the bids come in,” Bass said.

VFW members are hoping to meet their goal by Nov. 11, Veterans Day. As of now, the veterans have raised approximately $3,000 through donations from local businesses.

Post Chaplain Bernie Coy said prior to this, all VFW money raised went back to the community.

“We haven’t spent a lot of money on ourselves,” he said.

The VFW’s parking lot contains a large dip caused by rainwater and erosion, Bass said, as well as loose gravel, grass and leftover concrete from a building that is no longer there.

Along with having the garage sale, VFW members plan a spaghetti fundraiser in the future.

Bass encourages everyone in the community to come to the garage sale.

“It’s not just about the parking lot,” Bass said. “Come out to support your veterans. We want people to come out and show support, like we’ve shown support to the community over the years.”

Locals dig in for Prader-Willi Research