Monica back after heart procedure: SCC’s veteran head coach remains tough as ever going into ’15 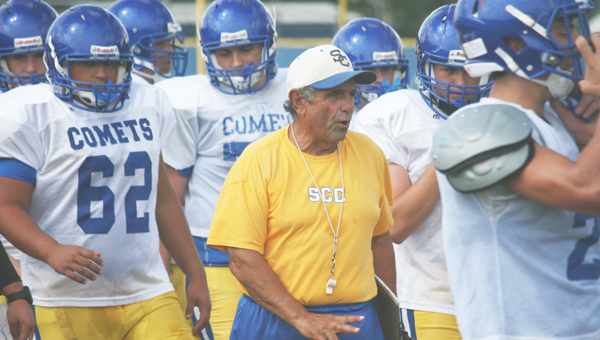 LAPLACE — Only a few days after being released from the hospital following a heart procedure St. Charles Catholic head football coach Frank Monica was surrounded by players at practice coaching his team up in preparation for their first action against another squad.

After experiencing chest pain, Monica, 66, underwent a heart procedure Thursday to  implant stents and clear blockages discovered in an artery.

Despite the setback Monica was eager to get back to leading the Comets as they enter the 2015 season.

“The doctors told me I was supposed to take a couple of weeks off, but I can’t do that,” Monica said.

After only a few days off for rest and recuperation Monica was back at practice on Monday.

“I missed three practices, that is it and school hasn’t even started yet so I won’t miss a beat,” Monica said. “I haven’t missed one day of school in 45 years. I don’t plan to start now.”

Monica is known for his dedication and hard work when it comes to coaching, a career he has had a lot of success at over the past 45 years. Prior to taking over at SCC Monica spent extended periods of time as a coach with Tulane University, Lutcher High School and Jesuit.

For the better part of the past two decades Monica has been the face and mastermind of Comets football, racking up a 142-53 record with the school. Monica said his recent heart procedure and hospitalization should not slow him at all.

“I am here now and ready to roll,” Monica said.

Monica’s return comes just in time for the Comets, who begin taking on outside competition. Beginning with this Thursday’s scrimmage.

When asked if his recent heart malady has him thinking about retirement, Monica was unequivocal in his response.

“Absolutely not,” Monica said. “I’ll do it a bit longer, as long as the good Lord lets me.”