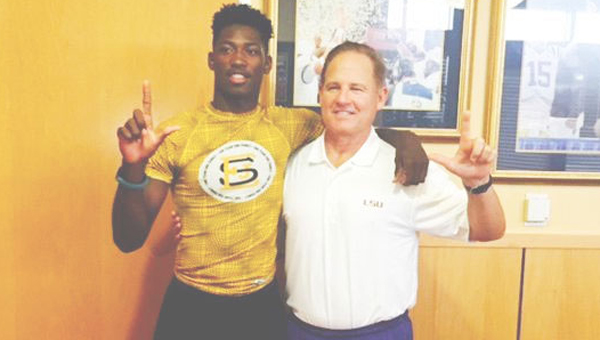 LAPLACE — Not content with waiting until the 2015 prep football season begins, several universities have been busy offering scholarships to some of the bigger names in River Parishes football.

A few high profile college football commitments have taken place over the summer, with two big ones coming in the past few days.

Measuring in at 6 foot 3 inches tall and 170 pounds, Coxie, an incoming senior, already had offers on the table from Tulane, Western Kentucky, Southern Mississippi, McNeese State, University of Louisiana–Monroe, Southeastern Louisiana and Grambling before going into a one day camp for LSU Friday.

Coxie long dreamed of attending LSU. With only a few days before end of the summer and the beginning of Wildcats training camp, he knew Friday’s camp would be his last shot to show the LSU’s coaches what he had to offer.

“I knew this was going to be the last camp I was ever going to have,” Coxie said. “I just had to go out and do my thing and make sure I got the job done.”

Coxie said LSU made sure to give him a tough test.

“The last two drills they put me up against their best two corners and I won over them,” Coxie said.

Within 24 hours of attending the camp Coxie was offered a scholarship to LSU, which he accepted on the spot.

Coxie, who transferred from Tara to spend his senior year at East St. John, will also see playing time at safety this year. In the Wildcats spring game Coxie scored a touchdown on defense as well as a rushing touchdown on offense.

East St. John cornerback Dontrell Allen was also at the LSU camp with Coxie and had a talk with LSU’s head coach afterward.

“Coach Les Miles talked to me and he explained to me that he is willing to offer me to come to LSU,” Allen said. “He wanted to send one of his coaches and then they would make the final decision.”

Allen, however, who also qualified for the Junior Olympics as a sprinter this summer, already committed to Mississippi State University in June and says he is not planning on changing his plans.

“I am not going to kick anybody to the curb,” Allen said. “I am just going to keep my options open. As of right now Mississippi State is where I am planning on attending my freshman year of college.”

This year the Wildcats will look to take advantage of Allen’s speed on offense as well as defense. The 6-foot, 180-pound Allen is expected to see a lot of playing time at tailback and wide receiver as well as starting on defense at cornerback.

Despite being expected to miss the entire upcoming season due to a torn ACL suffered in the spring game against Chalmette, Narcisse, who is entering his junior year, was highly sought after. The 6-foot-2, 195-pound Narcisse has been St. James’ quarterback since his freshman year and has put up remarkable numbers.

Narcisse pitted conference rivals Auburn and LSU against one another before ultimately choosing Auburn.