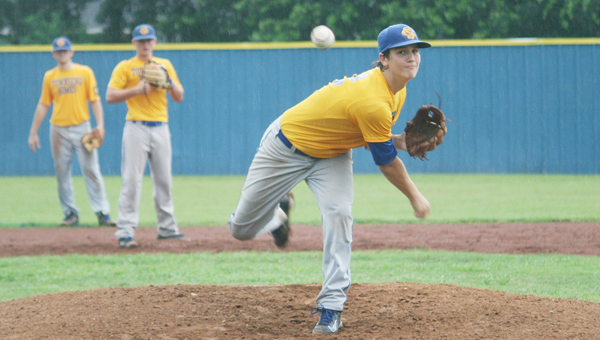 St. Charles Catholic, playing as Townsend Homes Post 383, was the top seed heading into the district tournament, giving them home field advantage throughout, but after falling 8-3 to Hahnville-based Otto Candies on Monday, they had to win against Lutcher or face elimination.

Townsend coach Wayne Stein said prior to the game he gave his players an added incentive to take home the victory.

“I just told them if we didn’t advance we were going to practice until July 12 so it was in our best interest to win,” he said.

Stein’s players responded with a 16-3 pounding of Lutcher in a rain-soaked game that was stopped after the fifth inning.

In the first inning the teams battled back and forth with Lutcher scoring one run to Townsend’s two, but Townsend pulled ahead and did not look back after scoring nine runs in the second inning.

Townsend ends district play with a 10-4-1 record and will advance to the Southeast regional tournament, which is set to begin next Wednesday. Otto Candies (Hahnville), who placed second in district tournament play, will join Townsend in the regional while tournament winner John Curtis advances directly to the state tournament.

Stein credited his team’s experience with the win and their tournament berth.

“It is hard to pinpoint one thing, but one thing – we scored a bunch of runs with two outs,” Stein said. “I wish I could take credit for it and let you know why, but I think it is because we have a mature lineup. We have seven returning starters from last year’s team.”

After wrapping up district play with Wednesday’s victory, Stein said he was pleased with how his team has handled themselves throughout the regular season.

“Overall it was a good day and it has been a good summer for us. Our four losses are to Hahnville, Jesuit – we lost to Lutcher once and we lost to John Curtis once – four real quality opponents,” he said.

Stein added that his team is excited to once again be heading to the regional tournament.

“That is always a goal of ours in American Legion to advance to the regional tournament,” Stein said. “I think it is the fourth or fifth time we’ve done it since St. Charles Catholic began playing Legion.”

Out of eight teams competing in the regional, only the top two will advance to the state tournament.