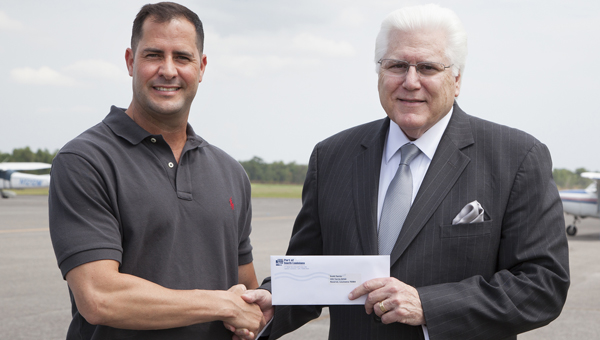 Scott Terrio, left, receives congratulations from Port of South Louisiana Executive Director Paul Aucoin after winning the ‘Out With the Old, In With the New’ Rename the Airport contest.

Paul Aucoin, executive director of the Port of South Louisiana, presented the winner of the “Out With the Old, In With the New” Rename the Airport contest with the Grand Prize on Thursday.

The contest is the latest step in rebranding the St. John Airport as an aerial gateway to the River Region.

Contest judges were given the airport name suggestions in a blind presentation, meaning they did not know contestant names nor have access to their identifying information.

Scott Terrio, a Louisiana native who has served 21 years in the United States Army, won out of nearly 200 entries for his suggestion of Southeast Louisiana Regional Airport.

His wife and 19-year-old son joined him for the presentation of the prize — a $450 gift certificate and complimentary tour for two to Oak Alley Plantation, an Antebellum historic home where guests can tour, dine and stay the night.

While serving overseas, Terrio, a Riverside Academy graduate, kept up with activities in his hometown of Reserve via social media and stumbled across the contest when one of his Facebook friends “liked” the Port of South Louisiana page. The renaming contest brought back fond memories for Terrio; his connection to the airport goes back to his high school years when he and his father used to fly as passengers in a family friend’s airplane.

Today, he is newly stationed at Belle Chasse after returning stateside from six years in Germany.

“For my last duty station to be in Louisiana is really something. There is only one Mobility Warrant Officer position in the whole State of Louisiana, so I’m really lucky to be back after leaving 21 years ago,” Terrio said.

He plans to retire once he finishes his service at Belle Chasse.

“We’re just so happy the winner of the contest is someone who dedicated so many years of service to his country. What better, more deserving winner could there be?” Aucoin said.

The contest was held on Port of South Louisiana’s Facebook page in an effort to raise awareness about the continuing transition of the St. John Airport in Reserve into the airport of choice for local industries, special guests, tourists and recreational flyers.

The Port of South Louisiana has recently ramped up efforts to invest in easier entries into the River Region. Aucoin said that improved aviation access is an economic catalyst that encourages local investment by corporate partners as well as small and medium-sized businesses. Increased hotel stays, rental cars, fuel, restaurant and retail purchases will provide an additional boost to the local economy.

“The airport is located in the heart of a major industrial corridor, and its location makes it easier for industries and customers to reach the River Parishes without having to commute from an airport located in New Orleans or Baton Rouge,” Aucoin, said.

After acquiring the airport, authorities at the Port of South Louisiana began implementing a redesign that included extending the runway by more than 1,000 feet to accommodate jet aircraft, addition of a Jet-A fuel station, renovation of the terminal, lounge areas and conference rooms, as well as an updated weather tracking system.

The finalization of the name is pending approval by the Federal Aviation Administration.

The airport is located 35 miles away from New Orleans and 50 miles from Baton Rouge.

Amanda Orr is a contracted free-lance writer of the Port of South Louisiana. To reach the port with questions or comments, email ahernandez@portsl.com.