Former RA star Turner has made presence known with Vols 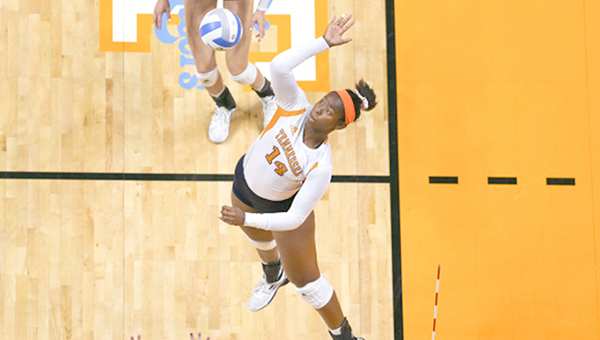 RESERVE — From the moment Riverside’s Kendra Turner stepped onto the floor for a district game with St. Charles Catholic in her junior year, it was clear the Rebels had something special: a player equipped to dominate.

It didn’t take long for the Tennessee Volunteers to come to the same conclusion.

Turner made a huge impact in her freshman season, proving herself a budding SEC star. The 6’1” hitter led the Volunteers in kills in her first season with the team, racking up 222, showing along the way the same combination of power and grace that allowed her to dominate at the high school level.

After transferring to Riverside after her sophomore season at Houma Christian, Turner sat out part of her junior year as her eligibility was cemented. She took the court for the start of district play and led the Rebels to consecutive district crowns and Class 2A state semifinal finishes in 2013 and 2014. She averaged 19 kills per game in her senior year for a talented Riverside team, earning a reputation as one of the state’s most devastating hitters.

At Tennessee, she hit the ground running, starting 22 of her 26 games with the team. In just her second start, she slammed down 19 kills. She was the only Volunteer player to record 20 kills in a game last season when she earned 23 on Nov. 7 in a conference game against Missouri.

“It wasn’t really a long process of getting comfortable,” Turner said. “At first, I was a little nervous, but after my first match, I gained a lot of confidence … I’d say the first kill I had was really the moment. I felt like, ‘this is the way it’s supposed to be,’ and from there I played really free.”

For a player to accumulate the statistics Turner did from day one, she must earn the respect of her coaches and teammates. Turner became the Volunteers go-to player when it was time to attack in just her first season.

“When we need a kill, it’s usually coming to me,” Turner said. “Coach (Rob Patrick) knew me from seeing me play in high school and in AAU that I’m the kind of player who gets kills and isn’t scared to attack. He had confidence I could do it.”

She also credited her Tennessee teammates for her quick learning curve — and for offering consistent motivation.

“They’ll tell me when they’re going to set me up, ‘you better kill the ball,’” Turner said. “They bust their butts to get in position and set that pass for me. It’s motivating because I want all of our hard work to pay off, and it does.”

Turner says Lucas-Nicholas has been an immeasurably positive influence in her life.

“If it wasn’t for her, I wouldn’t be where I am,” Turner said. “When I was 13-years-old playing with 18-year-olds, she coached me to not play scared. She was already looking all the way down the road at the college level for me, what she had to do to get me ready.”

Lucas-Nicholas pushed her to become a better, more rounded player, and the Volunteers took notice. Turner heard her coach’s words loud and clear, and took the time she deemed necessary to make those improvements. Turner played basketball for most of her life, but after a tremendous junior season at Riverside, she made a major decision: she was going to leave basketball and focus on one sport. Volleyball was her future.

“I knew I could do it, and I wanted to do everything I needed to do to push on to that goal.”

That decision has certainly worked out well for her so far.