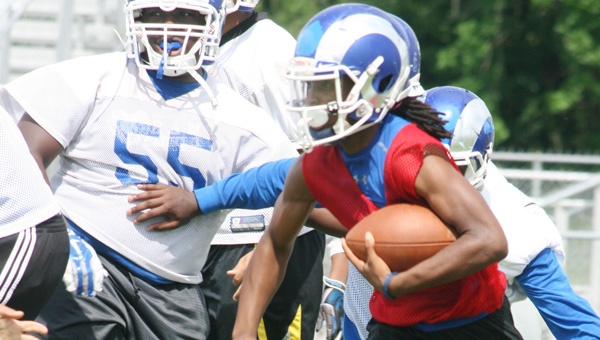 EDGARD — A familiar refrain echoed throughout the field at West St. John Thursday, as the Rams wrapped up their final spring football practice before today’s scrimmage against St. Helena Central.

Coach Robert Valdez, set to enter his eighth season as leader of the Rams program, repeated that word time and again, imploring his team to pick up its practice pace as it ran 11-on-11 drills.

“I want to get these snaps off as fast as humanly possible,” Valdez said.

Valdez’s Rams have reached at least the Class 1A semifinals in each of the past four seasons, including a championship game appearance in 2011. That success has come, in part, because of a high-octane no-huddle offense, an attack West St. John will test against a new slate of opponents as it moves up from Class 1A to 2A and into a district pairing the Rams with two other in-parish state powers, Riverside and St. Charles Catholic.

Last season, Jemoine Green emerged as the Rams’ quarterback and saw the first 13 starts of his career under center.

It means, Valdez said, Green will have more on his plate.

“He’ll have the opportunity to be more of a field general,” Valdez said. “He’s going to have a lot of freedom to check into and out of plays and put us in better positions.”

The Rams are bringing back most of their offense from a year ago, including the entire offensive line. Working with that kind of experience excites Valdez. But the Rams must replace some major contributors from a season ago, including L’OBSERVATEUR St. John the Baptist Parish Offensive MVP Morell Bartholomew and bruising tailback Bradley Borne, who combined to score 42 times in 2014.

Many of Borne’s reps will be absorbed by Lamore Boudoin, who emerged as one of the team’s most dangerous playmakers a year ago.

As for the prospect of replacing the 6’4” Bartholomew, Valdez didn’t sugarcoat it.

“It’ll be hard,” Valdez said. “A guy who scored 19 times and is always a constant threat for the big play. That said, we’ve got a few guys we feel good about. Jabari Walters played a lot last year. DaQuan Frank is a big guy at 6’2”. We’ve got a new face there in Malik Hutchinson, which gives us a speed element on the inside.

“But, at the end of the day, we need to win at the point of attack. We need to run the ball well to force teams to give us those one-on-one opportunities.”

On the defensive side of the ball, Jamal Walters returns at defensive back, where he intercepted nine passes last season.

“He’s likely the guy to quarterback the defense,” Valdez said.

Kie’Ave Harry has shined at cornerback this spring. Valdez said Tre’Von Borne will play a hybrid position, shifting between safety, cornerback and linebacker, reminiscent of the role Trey Nathan played in  2014. Up front, Kelon Gardner is emerging, while Dauntae Gaudia has impressed at tackle. Covan Borne will convert to linebacker from the defensive line, and Valdez is excited about his prospects.

“He runs so well, so we’re moving him back,” Valdez said. “We’re excited to see the development of some of these guys.”

The Rams will host St. Helena at noon today at Rudolph Dinvaut Stadium.