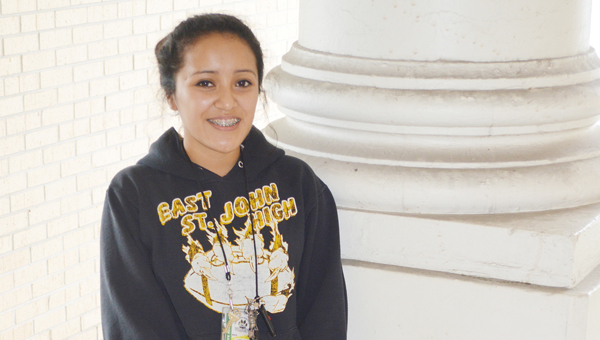 While many students dream of summer plans that include relaxing and doing whatever they can to avoid any sort of education, that’s not what Iveth Ramirez has in mind.

Ramirez, the 15-year-old daughter of Gregorio and Maria Ramirez of Reserve, just finished her sophomore year at East St. John High School. This summer she will participate in the University of New Orleans Minority Awareness Program in Geoscience’s fossils and geology summer field experience.

“I’m really excited,” Ramirez said. “No one in my family had gotten to go on a trip like this.”

The trip’s two-week itinerary includes a day in Yellowstone National Park exploring geothermal features, a trip to Montana’s Museum of the Rockies, a visit to the Great Falls of the Missouri River, a visit the Montana Dinosaur Trail and a voyage to collect fossils in the late Cretaceous Judith River Formation.

Ramirez is one of only two students in the metro New Orleans area selected for the trip, which will explore several dinosaur fossil sites and ponder the demise of the dinosaur.

“I went to UNO for an interview and we talked for about an hour,” Ramirez said of the second step in the process to get accepted.

She initially had to fill out an application for consideration, a step she said James Oubre, the head of ESJ’s science department, helped her with.

Ramirez said she, as well as her family, was happy and surprised when she received an email a month after the interview that let her know she had been accepted.

UNO officials said the mission of the program is to provide quality classroom and field experience to high school minority students in order to interest them in a career in the earth sciences. They said if a participating student chooses to pursue a career path in geoscience, scholarships and other support during their college studies at UNO is available.

“I really thank God for this opportunity,” Ramirez said as she flipped through the camera roll on her phone. In it she has saved pictures of some of the places she will visit this summer.

Oubre said Ramirez was the perfect candidate for the program.

“She has been one the hardest working students that I have had the pleasure to teach in my 10-year career,” Oubre said. “She always takes leadership during group activities and labs while in class.”

He said Ramirez is willing to put in the extra work to ensure she not only learns subject matter, but masters it.

Mastering new things is nothing new to Ramirez. When she moved to Reserve from Mexico when she was 12 years old, she spoke no English and had to learn her new language by watching TV shows and getting extra help from her teachers at Fifth Ward Elementary School.

“I really think this trip will change my life forever, just like coming to the United States changed my life,” she said.

Ramirez has a 3.1 GPA at ESJ, where she said her favorite subjects are science and math.

She has participated in the Interact Club, 4-H, Health Occupations Students of America and Beta Club.

Ramirez said she likes to read and dance in her spare time, and she aspires to be a nurse or midwife.

LAPLACE — Residents of the River Region can save money while getting prepared for the upcoming hurricane season, which runs... read more