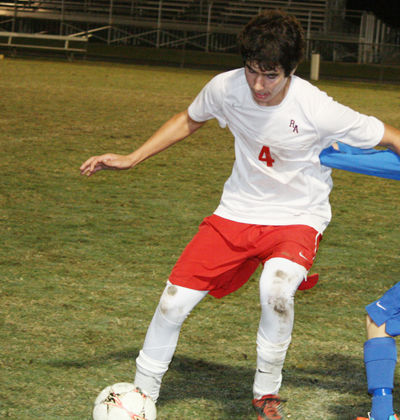 How right he was.

Riverside scored three second half goals en route to earning the first playoff win in the history of the boys soccer program, a 3-0 upset of Division III No. 10 North Vermilion.

Tyler Gauthier, Jeremy Lesaicherre and Dane Edler each scored for the 23rd seeded Rebels, who advanced to the regional round, where they will host St. Frederick at 4 p.m. Thursday. It will be the first home playoff game ever for the boys program.

“It was an awesome feeling, and I couldn’t be more proud of my guys,” said Reed, currently in his first season as Rebels’ coach. “Offensively, defensively, our execution was on point. We scored those three goals all within 15 to 20 minutes of one another. That was the best game we’ve played all year.

“This was going to either extend our season, or be a foundation to build upon for next year. Thankfully it was the first.”

Gauthier, Riverside’s leading goal scorer this season with 20, said he and his teammates are pumped up to have made school history.

“This was a big goal for us for a long time now,” Gauthier said. “We feel like we proved to everyone in the state that we’re not some team that isn’t a factor now that it’s the postseason. Those last 20 minutes were difficult, because it was right there. We just tried to defend and not let any cheap scores in, because we knew all it takes is a few seconds to get a score and momentum.”

North Vermilion missed a penalty kick in the first half, something Gauthier said was key.

“If they make that kick, they get momentum, and I don’t know that it’s not a different result,” he said.

Instead, the teams went into half in a scoreless tie.

“I told our guys I felt like we were one touch away,” Reed said. “We were getting good looks. We just were one pass away. We looked to get Tyler isolated one-on-one, and early in the second half we were able to.”

A Gauthier goal got the Rebels a 1-0 lead, and Lasaicherre and Edler quickly followed suit.

The Rebels have long struggled on the soccer field, but began turning heads late in the season with solid performances against a strong district slate featuring four other postseason teams.

“I feel like we play in one of the best districts in the state,” Reed said. “People look at our record and just see seven wins, but we really tested ourselves. Five of us (in the district) made it in.

“It’s just really satisfying. We have a group of guys who buy in, not just to what I’ve been preaching, but they buy into each other. Our guys are happy, but they’re also not satisfied. This is a hungry group.”