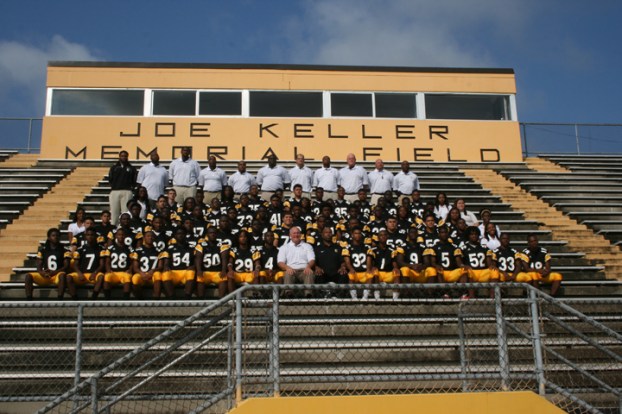 LAPLACE — It’s East St. John. It’s Hahnville.
History indicates it’ll be a fight to the bitter end.
The Wildcats visit the Tigers this Friday night in a game that promises to live up to its predecessors and that has major District 7-5A implications.
The two teams have mirrored one another since the outset of the season. Both teams struggled offensively against a slate of tough foes through three weeks; ESJ scored just 14 points in that span, Hahnville just 25.
But since then, both teams have put healthy numbers up on the scoreboard. The Wildcats have scored no less than 31 points in each of their last three games, all victories. Hahnville scored 27 and 22 in wins over Thibodaux and Terrebonne and has begun cashing in on a powerful rushing attack led by tailback Lynn Simmons. Simmons topped 200 yards against Thibodaux and 100 yards against Terrebonne, while teammate Todge Scott also rushed for 100 in the Terrebonne win last week.
The Wildcats (3-3, 3-0) also base their attack on the run, with quarterback Xavier Lewis and tailback Nigel Anderson both accumulating big numbers on the ground over the past month.
“Hahnville’s good,” said East St. John coach Phillip Banko. “You look at their body of work … they outplayed Rummel before losing on the last play. They should have, in my mind, beaten Landry-Walker. They played a great game there. They beat good Thibodaux and Terrebonne teams, and they beat the heck out of Salmen. And nobody’s even been close to Destrehan, so I throw that one out.’
“There’s gonna be a large, rowdy crowd out there on Friday. It’ll be a playoff-like atmosphere. We’re looking forward to the challenge. It’s a big one.”
Even while Hahnville (3-3, 2-1) struggled to score early in the season, the Tigers didn’t lack for opportunities thanks to their rushing attack, a point noted by Banko. Hahnville rushed for 248 yards in its 13-7 win over Salmen. It rushed for 111 in a loss to Rummel. Simmons rushed for 108 in HHS’s loss to Landry-Walker before exploding for 206 in its win over Thibodaux.
“They’ve always been able to run the ball,” said Banko. “We’re gonna see just how good our defense is on Friday. Our defensive line and our linebackers have been the strength of our defense, and Hahnville attacks those areas very well with counters, isos … we’ll have to be on point up front.”
Defensively, Banko’s chief concern with the Tigers starts with the secondary.
“They’ve got two to three kids back there, all prospects. Seniors, so they know where to be. 23 (Jamal Smith) is a really exceptional player, especially. 15 (Dwayne Thomas), he’s a war daddy.”
But the Tigers bring a lot to the table up front as well.
“Their defensive line is extremely disruptive. Their linebackers run to the ball,” said Banko.
Of particular concern to Banko is what Hahnville is able to do on special teams, particularly in the kicking game. Last week, the Tigers blocked three punts against Terrebonne, a sight that may have brought back unwelcome memories for the East St. John coach. A year ago, Hahnville broke its victory over East St. John open after two Wildcat mistakes in the kicking game, errors Banko credited Hahnville for forcing due to the pressure it brought. One bad snap went for a safety, the other set Hahnville up at the ESJ 2 for a score in a 26-16 win.
“Those are game changing plays, obviously,” said Banko. “We made two punt blunders against them in what was a close game.”
The Wildcats, too, have ways of busting loose on special teams. ESJ returned two punts for touchdowns (Lewis, Amani Martin) in its win over Central Lafourche. Last week, Lewis nearly broke one for a score against H.L. Bourgeois.
These teams have met in memorable games historically. In Banko’s first year with the Wildcats, ESJ rallied from a 21-0 deficit to win 24-21. East St. John and Hahnville famously went to six overtimes in a 43-42 ESJ win in 2007. Hahnville topped the Wildcats in a pair of 2005 post-Katrina thrillers, the each coming down to a final play Hail Mary pass — Hahnville caught the first for a score and broke up the second.
“These communities are close to one another. You’ve got kids playing against friends and family members,” said Banko. “So it’s already intense. And when you see the history of these teams … it’s a big game for us from the simple standpoint that it is our game of the week. But the stage is always a little bit bigger in this one.”