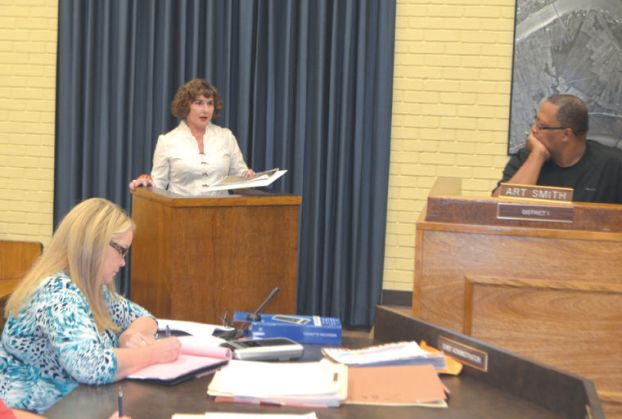 Democracy in action at Zoning Board meeting

By Kimberly Hopson
L’Observateur
LAPLACE – Concerned residents of Old LaPlace came out in full force Wednesday evening to the St. John the Baptist Parish Zoning Board of Adjustments meeting to exercise a right as old as the nation itself.
The item of contention seemed innocuous enough — citizen Carol Vasquez was looking to lease a property to build a convenience store in the Milesville area of Old LaPlace. The property was formerly a pharmacy owned by businessman Thomas St. Martin. Vasquez requested that the board add a variance to ordinance 113-514 to allow her to reduce the number of required parking spaces from 14 to 10. Vasquez also asked that the board waive a dust-free paver requirement for the parking spaces on the side of the building.
“We’re proposing to build a convenience store,” said Vasquez. “The area that is open for rent happens to be 1,800 square feet. The square footage for the convenience store would be 950 square feet. Again, that’s a lot of store for a convenience store. That’s why I requested the variance,” she said.
Board member Janet Isom asked what her plans for parking would be if business began to grow, and Vasquez said there were no plans to expand in the future.
“There’s nothing back there. I think it would be beneficial to the neighborhood to have something where children could go get a Coke, or people that work back in the that area could get a cold drink, snack,” said Vasquez.
Vasquez went on to say that she and St. Martin had previously discussed hours for the store, saying that it would not be open past 8 p.m. She also said the store would be zoned C-1, disallowing the sale of alcohol or contraband of any type.
“I even had a client say ‘Oh, I wouldn’t have to run all the way into town to get my last minute things.’ There’s plenty of people that I see when I’m leaving there late at night walking. The closest place would be about six to eight blocks away, to get to the drug store to get a cold drink or something that you might have forgotten to get. If you don’t drive, that would be a nice convenience. And that’s what I mean by convenience store,” Vasquez explained.
However, the residents of the community came out in force to prevent the business from taking flight. The residents felt that the store would encourage loitering and littering and would eventually become an eyesore. Also, some residents were concerned that it would bring crime to the community.
“I’m in disagreement with putting a convenience store there. How are they going to make any money? Sky high on the prices because we have Wal-Mart, Walgreens, that little restaurant out on 51. Maybe it would start off small, but as it grows it would turn into something else. Today, if you don’t sell alcohol you won’t make no money. Mr. St. Martin, I respect you. I used to come to your drug store. Why do you want to inflict this on us? We don’t need it. We don’t want it,” said Delores Martin.
Jane Montz DesRoches said her parent’s family home turned into an eyesore when it was turned into a grocery store years ago.
“I have first-hand proof of what happens when a residential section turns into a full-fledged grocery store. My parents’ golden years were controlled by this horrible store that threw junk in my mother’s ditch and carried on all night long,” said DesRoches.
“My mother complained till her dying days about the store next door. When I moved back here, everyone wanted to know why I didn’t move back into my mother’s house — because I didn’t want to live across from commercial property nor did I want to have that building, which is empty, next to me. It has devalued the house.“
Both Vasquez and the board restated that since the building would be zoned C1, the citizens would not have to worry about alcohol and other unsavory items being sold.
“Don’t tell me what they cannot do in St. John Parish. We just now finished fighting on Capt. Bourgeois Street. That was not zoned commercial — been zoned residential for over 60-something years,” rebutted resident Linda Hughes.
“It was sold to a company that came into our community and developed a commercial business. And it took us how many years? Eight years. We just won the case. So don’t tell me what these people cannot come and do once you all approve this, because it can be done,” she added.
In response to all of the fervor, Isom motioned to deny the store. The motion was seconded, and the board voted down the store in a unanimous vote.
Property owner St. Martin said he had already turned down three speculative renters for the property because he didn’t think it would be good for the neighborhood.  Despite the dissent, St. Martin said there are no hard feelings between him and the residents.
“If I thought it was going to harm somebody, I wouldn’t have brought it up in the first place. I didn’t know it would be such a confrontational matter. I’ve been here for years. Things like that just don’t bother me. They’re all friends of mine,” he said.
St. Martin said he will keep looking around and try to lease the building to someone that everyone can agree on.