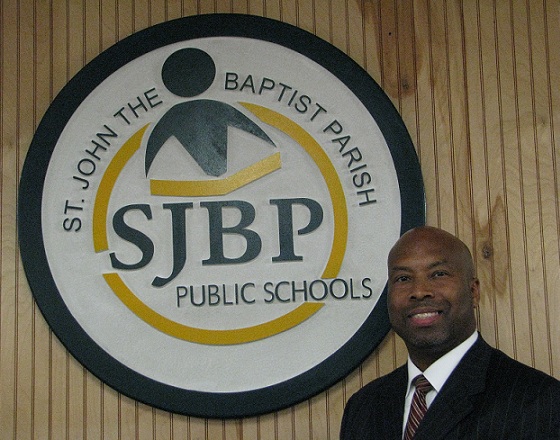 RESERVE – After months spent at a virtual standstill before hiring search firm Hazard, Young, Attea and Associates in April, the St. John the Baptist Parish School Board finally selected a permanent replacement for former Superintendent Courtney Millet during a special meeting Thursday evening.

Kevin R. George will take over his duties as the new superintendent by the beginning of July. George was selected in an unanimous vote by the board. Board member Gerald Keller initially voted to hire North Carolina candidate Dr. Maria Pitre-Martin but later retracted his vote, saying he did not want it to go on record that the decision wasn’t unanimous.

George and Pitre-Martin were the final two candidates selected from the top-five list assembled by Hazard, Young, Attea and Associates.

The decision warranted audience applause and a good-natured clap on the back for Herbert Smith, who has served as interim superintendent since Millet’s departure last summer.

George has been employed since 2012 by the Louisiana Department of Education as a district support deputy network leader. In that capacity he works with school districts to implement new initiatives such as common core state standards and COMPASS.

George, a graduate of Notre Dame High School in Crowley, received his master’s in education leadership from Nicholls State University. He is currently a resident of Thibodaux.

“Before you speak, make sure you want this job,” joked board member Patrick Sanders.

“I am very humbled today. I don’t have every answer that this district has, but I’ll tell you one thing — I will not stop until we do have the answers. I know that by bringing people together, we will be able to solve whatever issues, whatever problems that we may have in this district,” said George.

Also of note during Thursday’s meeting was a minor debate concerning School Board leadership.

Board member Rodney Nicholas motioned for a change of leadership.

“The leader of the school district should be one who can articulate and clearly communicate the vision of the district,” said Nicholas.

He went on to nominate board member Keith Jones for board president.

The nomination raised a question of parliamentary procedure from board member Russ Wise, who asked whether it was allowable to elect or vote on a new board president when the two-year term of Clarence Triche, the current school board president, was not officially up. Wise also stated that the board would have to vote to remove the current president before electing anyone new.

School Board attorney Orenthal Jasmin clarified the situation by stating that officers may be removed from their term of office by a majority vote of the board. Jasmin affirmed Wise’s second point, saying that board members would have to vote to remove Triche before nominating anyone else.

“I’m sorry that some people felt that I did a bad job so far. I’m happy to stay here as president for a while,” said Triche.

“Someone once said ‘To be able to lead you have to be able to follow.’ The situation became a problem when you came in and didn’t want to listen to other board members. Had you done that, we probably wouldn’t be in this situation now,” Burl retorted.

LAPLACE – The St. Charles Parish Permit Office, located within the Planning and Zoning Department at 14996 River Road in... read more