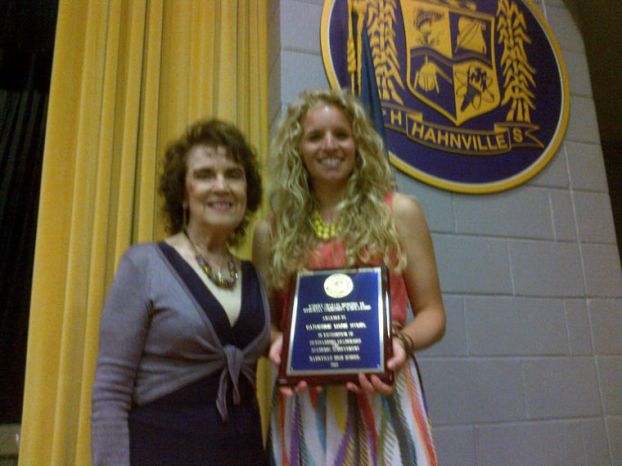 Katherine Hymel was named the recipient of the 2013 Robert C. Menezes Sr. Memorial Community Scholarship at Hahnville High School’s awards ceremony held at the school.
The $5,000 scholarship is awarded to a student who has demonstrated leadership abilities, academic achievement and contributions to the local community. The scholarship is awarded to a graduating senior selected by the school and is in memory of Bob Menezes, who was coach and later principal of Hahnville High School for 20 years until his death from cancer in 1975.
“Katherine epitomizes ‘student leader’ in all she does and stands for at Hahnville High School,” said Ken Oertling, principal of Hahnville High. “She always displays a positive attitude and tireless work ethic in class, after school, during competition or a performance.”
Hymel graduated summa cum laude, was selected to the Superintendent’s List and was a four-year recipient of the DOW All A’s Award. She was a member of the National Honor Society, serving as its vice president and president, the Beta Club and the Spanish Honor Society. Hymel served on the Student Council four years and was elected junior vice president and president of the student body. For her leadership abilities, she was selected to participate in the Louisiana Association of Student Councils Leadership Workshop and its Winter Convention as well as participate in the Archdiocese of New Orleans Teen CROSS Leadership Council.
Hymel participated in both the HHS Marching Band and the Symphonic Band serving as vice president and president and earning recognition in both the Parish and District Honor Bands. She earned multiple first place awards in the HHS, District and State Young Author’s Contest for her work in fiction and non-fiction and received the Harvard Book Award. She was a four-year letterman and team captain of the tennis team and a four-year member and officer of the Fellowship of Christian Athletes.
Hymel also finds time to serve the community by volunteering with Habitat for Humanity Housing Project, Brown Grant Service Learning Literacy Project, the St. Charles Toy and Gift Fund Program, the Rotary Club Alligator Fest, the Catholic Charities Hurricane Isaac Relief Program, the St. Joseph’s Abbey Youth Fest, the St. Charles Hospital Cardiac Rehab Center and the Second Harvest Food Bank. She has served as coordinator for the first Hahnville Trunk-or-Treat Program, the CYO Relay for Life Team and the Archdiocese of New Orleans World Youth Day and its Junior High Rally Workshop.
Hymel also is very active in her church singing in the Holy Family Manna Choir Music Ministry, being a Team Captain and Trainer of Altar Servers, participating in the CYO Leadership Council and receiving the Archdiocese of New Orleans Outstanding Parish Youth Award.
Hymel is the daughter of Merlin and Susan Hymel of Luling. She plans to attend the University of Alabama at Birmingham and major in molecular biology.

The story of Jackie Robinson

I would like to encourage everyone to make an effort to see the movie “42.” It’s the life story of... read more