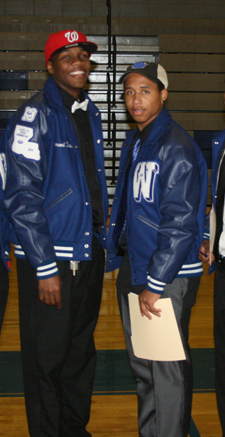 Damond Pierce and Deja Feist were the respective male and female recipients of the school’s Anthony Miller Award, considered the highest honor an athlete can receive at the school. The Miller award honors the most school’s most outstanding male and female student-athletes during their senior year, chosen through a combination of factors that include performance over multiple sports  as well as rank within the senior class academically.

Meanwhile, Kylum Favorite and Jaylyn Gordon were the respective recipients of the Gordon Becnel Memorial Scholarship. The $250 scholarship is sponsored by Lt. Col. Whitney Paul Allen Jr., an alumni of West St. John. The scholarship is awarded to the athletes who embody the school’s most outstanding athletic achievements.

Pierce was a standout in football, baseball and basketball. A starting defensive back for one of Class 1A’s elite defensive units, he signed a football scholarship with Texas Southern after helping to lead the Rams to a state semifinal finish and a District 9-1A championship.

On the basketball court, Pierce was a team captain who provided the team much of the team’s frontcourt muscle and with a more than capable rebounder.

“He’s extremely dedicated,” said West St. John athletic director Robert Valdez. “Damond is a high-character kid who has a lot of discipline … an extremely consistent performer athletically and very solid academically. He’s a good person who embodies a lot of the qualities you’d hope for anyone to possess.”

Feist starred on the volleyball and basketball courts as well as on the track during her tenure with West St. John.

She led the Rams’ volleyball team this season in blocks and kills, providing the team’s most dangerous scoring option at the net.

Feist was the starting center on the Lady Rams’ basketball team that finished as state runner-up, with a stellar record of 31-2. That team went to two straight Top 28 tournaments – the first two appearances there in the history of the school – and won 50 of its last 53 games.

“She’s a very talented, smart young lady,” said Valdez. “She’s been very, very helpful in the growth of our girls basketball team. No matter what she’s doing, she embodies the idea of a team player.”

Favorite was a standout in football and track and field. He was L’Observateur’s 2012 Offensive Most Valuable Player on the St. John Parish gridiron, after rushing for 1,315 yards and 19 touchdowns to lead a powerful Rams’ offense. On the track, Favorite was a part of West St. John’s state-runner up 4×100 relay team. He has signed a football scholarship with Southern.

“He had one of the best two-year stretches that anyone has had in high school football,” said Valdez. “He’s a real good kid and a hard worker. You always know he’s going to do what’s right. He’s headed to Southern and we’re all very proud of him.”

Gordon finished a stellar basketball career  this season that saw her earn honors as L’Observateur’s St. John Parish MVP for the third consecutive season while leading her team to its best season ever. The Rams’ guard was named Class 1A’s Most Outstanding Player on the Louisiana Sports Writers’ All-State Team after averaging 22.3 points per game this season. She signed a basketball scholarship with Louisiana-Lafayette, the first Lady Ram basketball star to ever sign a Division I scholarship.

“She’s one of the best female athletes to ever come through West St. John,” said Valdez. “She’d do her thing every night when everyone knew she’d be doing it, and nobody stopped her. She’s why our basketball program has been so successful.

“Each of these four kids understand the idea of student first, then athlete. They’re all extremely deserving.”