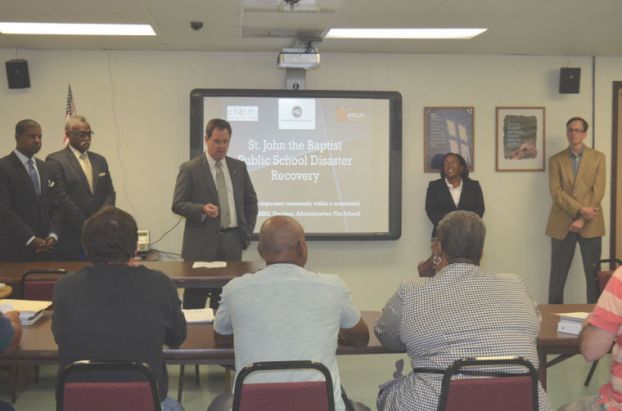 RESERVE – The St. John the Baptist Parish School District is inching closer to solidifying major decisions concerning the future superintendent and the repairs at Lake Pontchartrain Elementary School and East St. John High School.
The Disaster Selection Committee met last Tuesday evening to tally the votes and decide which firm would receive the still-pending disaster management contract. The three contenders, J. Caldarera & Co, Hammerman and Gainer Inc. and CSRS, were allowed to make presentations and participate in a short question and answer session at the committee’s meeting Thursday.
The companies were scored individually by each committee across three categories with criteria such as cost, corporate background and experience, approach/methodology and staff qualifications. Totals were tabulated on-site by an auditor.
Hammerman and Gainer snagged the contract edging out CSRS with a score of 2472.5. CSRS’s score was 2403.30
The Disaster Selection Committee will submit their selection to board members at the board’s meeting Thursday.
School Board members also met with Louise Coleman and Ben Martindale, representatives of Hazard, Young, Attea and Associates, the firm that was hired in April to aid in the search for a superintendent to replace Courtney Millet. The firm revealed that they had at least 35 applications for the position and had successfully narrowed down the numbers to make way for the top five applicants. The firm is only slightly behind its scheduled presentation timeline, which was originally set to be done by the end of May.
Kevin R. George, a resident of Thibodaux, was one of the top five. George earned his Master of Education at Nicholls State University. George is currently working for the Louisiana Department of Education as a district support deputy network leader.
Paula L. Johnson, a resident of Vicksburg, Miss., was also listed as one of the top give. Johnson earned her master’s degree at Cheyney University and currently works for Vicksburg Warren School District as assistant superintendent of curriculum and instruction.
Dr. Maria Pitre-Martin is a resident of Holly Springs, N.C., where she works with the North Carolina Department of Public Instruction as state director of K-12 curriculum and instruction/regional lead supervisor. Pitre-Martin earned her PhD at Texas A&M University.
Corwin K. Robinson, another candidate, is currently employed with Lake County Schools as a superintendent. Robinson is a resident of Clarkville, Tenn., and earned the first three chapters of his doctorate degree at the University of New Orleans.
The final candidate, Debra H. Schum, retired from the Louisiana Department of Education in 2012 after working there for slightly more than three years. Schum is a resident of LaPlace and completed her Master of Education at Southeastern Louisiana University. She is currently self employed as an education consultant.
In other happenings, board member Rodney Nicholas also presented board members with several items to add to the Thursday meeting’s agenda. Among those was a request to change board leadership. Some board members have expressed displeasure with the leadership of President Clarence Triche since he was elected earlier this year.
The next St. John the Baptist Parish School Board meeting will take place at 6 p.m. Thursday in Godchaux Grammar Cafeteria.