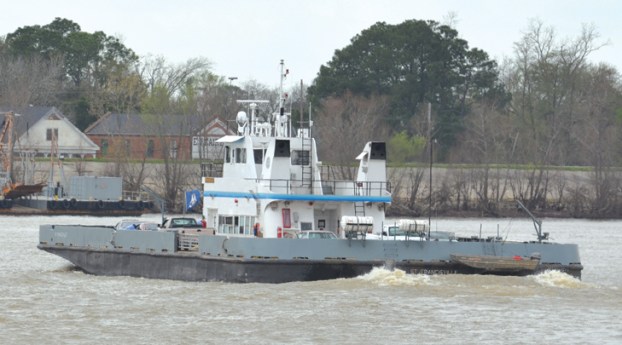 LAPLACE – St. John the Baptist Parish officials and council members made a trip to Baton Rouge on Thursday morning to stage a battle to save the Reserve/Edgard ferry.
St. John Parish Division A Councilman-at-large Lucien J. Gauff III said the situation is dire. He and a small delegation attempted to have legislators add the ferry to this year’s budget, but Gauff said they reached a stalemate.
“We’re at a stalemate right now, and a stalemate is not good for us because it discerns that there’s no money in the budget for us,” said Gauff. “The budget has been approved already, and what they’re looking for us to do is to come up with a way to come up with some money out of our budget to fund it. We took that as an ‘OK, we’re going to defer this until tomorrow.’ There’s no telling what’s going to happen, one way or the other.”
“We’d like to just back up there and give them the facts and hopefully they will find a way to keep our ferry for us. As hard as it is to keep the ferry, it would be even harder to bring the ferry back. The fighting has to be done now, and hopefully we can get something done,” he continued.
The Louisiana Senate Finance Committee met Thursday morning in the Senate Committee Meeting Room in Baton Rouge to discuss House Bill 1 and transportation, including the Reserve/Edgard ferry. The 2013 Legislative Session is scheduled to end Thursday, and funding for the Reserve/Edgard Ferry remains absent from the 2013-2014 budget.
The delegation planed to make a return trip to Baton Rouge on Friday morning for one last-ditch effort at saving the ferry.  any headway on the issue.