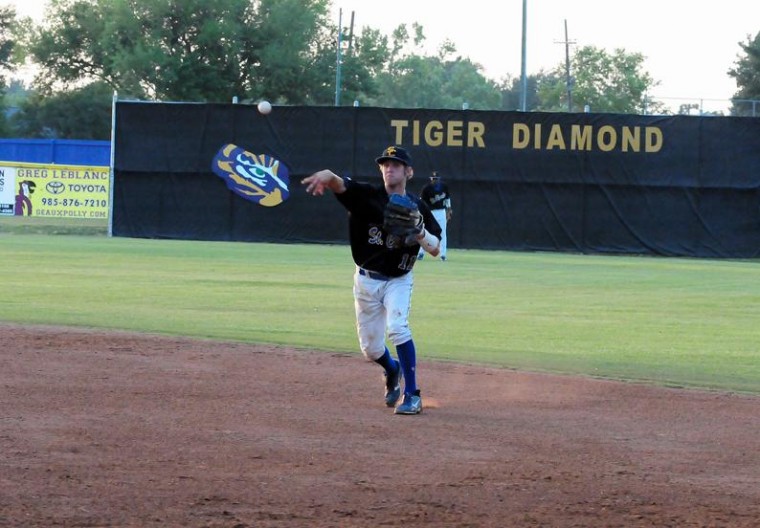 LAPLACE — St. Charles’ football championship win in December was effectively a celebration of a program that had relentlessly knocked on the door for years, churning out strong season after strong season, and finally securing its reward.

The Comet baseball program has mirrored that consistency, and St. Charles and its supporters hope that the reflection shows even more detail by season’s end.

Indeed, fresh off of a run to the state quarterfinals in 2011, this year’s Comets team has already shown promise through its American Legion play last summer. Its Townsend Homes squad reached the Southeast Regional for the second straight season. SCC had to replace its entire starting rotation and the third, fourth and fifth hitters in its lineup. Chad McNeil and Nick Montagut helped answer both calls, each hitting over .500 and stepping up within the pitching rotation. Donnie Savoie and Macky Cortez are two others who had strong summers that Waguespack said will be leaned upon to provide offense.

As it prepares to open its season Thursday at its own tournament, the Comet Classic, SCC coach Paul Waguespack was cautiously optimistic about his team’s standing.

“I think we’re okay right now,” said Waguespack. “We have to find some pitching. We’re replacing three guys who were mainstays in our program. For us, it comes down to staying focused and throwing strikes. Nobody’s emerged as a clear-cut number one. It’ll be a few guys. Chad McNeil, Nick Montagut, Conner Smith are guys we’ll rely on.

“So far, we’ve done a really good job playing defense. If that continues, we’ll be okay.”

Waguespack said that the focus on defense and finding the strike zone is heightened even more than usual, due to the different bats now used at the prep level, as ruled by the LHSAA — these bats, the ones currently used at the collegiate level, are thought to be significantly less ‘live’ than those used before.

“That’s why I think if you stay in the strike zone and play good defense, you’ll be fine,” said Waguespack. “You do those things and whatever happens, happens, when the ball is in play.”

St. Charles will play Northlake Christian to open its season Thursday, Evangel on Saturday, then Sterlington and Lutcher on Sunday.

“It’s the same ol’ tough schedule we always play,” said Waguespack. “Evangel and Sterlington are 2A powers. Northlake’s one of the best programs in 1A. Mandeville and Lutcher are in the tournament and they’re two of the best (in 5A and 4A respectively). It’s a good test for us, but it won’t get easier after that.”

Riverside returned to the state quarterfinals last season under then first year coach Matt White, scoring an eye-opening 15-3 win at then-defending Class 2A champion Northlake Christian in the second round.

Riverside was eliminated in the quarterfinals by eventual state champion Evangel, and many of the players that comprised that Rebel team have graduated.

But the cupboard is hardly bare in Reserve, as Riverside returns a strong core led by standout right-handed pitcher Tate Scioneaux, who struck out nine of 11 batters in a preseason scrimmage and who White said is now approaching 90 miles per hour on the radar gun.

“He’s really on top of his game and is doing an unbelievable job in terms of leadership,” said White. “Early in the year, we’ll probably use him more as a closer while we try and stabilize the rest of our rotation behind him.

Scioneaux is also a terror with the bat, hitting .413 with 13 home runs and 42 RBIs last season. Grady Gieger and Wren Vicknair are two other staples that return after strong prep and summer seasons.

“The sky is the limit,” said White. “The way the playoffs are set up, you can use your number one almost every time out … At the same time, we’re going to give our young guys a chance to play and see what they can do. That’s how we want to build the program, find our young talent and give them a chance to get started early.”

Riverside begins play Thursday at the Brother Martin tournament, and will open play at 1 p.m. against East St. John, which will be debuting its new head coach, Curtis Tsuruda. The game will be played at Chalmette.

Tsuruda, the football team’s longtime strength and conditioning coach, got his feet wet after taking over the program last summer during American Legion play — that team finished the summer with a strong showing against St. Charles-based Townsend Homes before bowing out in the district playoffs.

Tsuruda said that the focus early in the season is changing the culture of a program that has struggled with consistency in recent seasons.

“It doesn’t happen overnight,” said Tsuruda. “It’s a matter of finding a way to improve in something every day. And also being on time, being prepared, being focused … when you do those things, then everything starts falling into place for you. Things start to head in the right direction.”

West St. John is still in the process of finalizing its search for a new head coach after the retirement of longtime coach Lennix Madere. Assistant coach Greg Joseph has been preparing the team for the upcoming season, a team that will be relatively young in 2012.

Jarius Moll, Dontre Turner, Steven Brignac and Austin Howard are among the top returning players for the Rams; that quartet, Joseph said, forms the team’s core.

“These are guys who can play multiple positions and produce,” he said.

“They’ll be big time for us … we’ll also have a number of ninth and 10th grade guys who have never played at the high school level. It’s a mixed bag.”

Moll, Turner and Howard will comprise the starting pitching rotation to begin the season.

Joseph said that the team will hang its hat on defense while the team’s young hitters come along.

“We have a chance to be really good defensively,” said Joseph. “At the same time, though, everything will take time. The biggest thing is improving our team’s awareness of what goes on out there situationally, improving their baseball understanding. That comes with experience.”