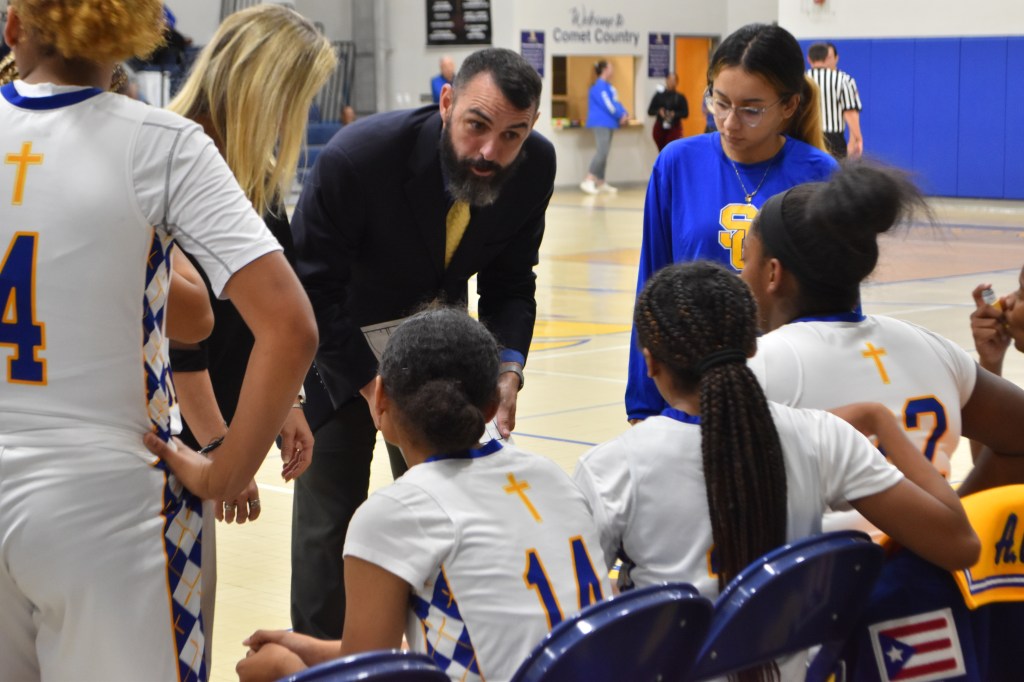 Coach Jeff Vitrano addresses the team during a timeout.

LAPLACE — First-year head coach Jeff Vitrano knew this season would be full of growing pains for the young St. Charles Catholic girls’ basketball team. In the throes of a challenging schedule, the ladies have become more aggressive on the court and are continuing to move in the right direction as district gets underway.

The Lady Comets entered the week 7-14, preparing to face International High School in the first district game of the season. Also on the horizon are district games against St. Mary’s and Country Day, two teams ranked almost evenly with St. Charles Catholic on GeauxPreps. According to Vitrano, the next few weeks of the season will determine whether St. Charles can jump into an 11th or 12th seeding and secure a home game in the first round of the LHSAA playoffs.

“We don’t have any guaranteed wins in district,” Vitrano said. “I think every game is going to be a dog fight.”

Even the youngest on the team have had to pull their weight. Four freshmen and a sophomore started during last week’s game against Chapelle. The early season was also impacted by injuries.

“With 15 people on the roster, we don’t have a ton of depth. We’ve had some people without varsity experience step up and do their part,” Vitrano said.

Chasidy Gatlin and Marissa Sterling are growing into leaders on the defensive front. Truthfully, the entire freshman class has had to grow up on the court to find the right combination going into playoffs. Sophomore Megan McMillon, another key piece of the defense, has gained a lot of confidence in handling and shooting the ball. On the offensive side, freshman Chavez Smith has found a prominent role that reflects her hard work during practice.

Meanwhile, senior Mya Brown has continued to shine on the court and is expected to soon reach her 2,000-career point milestone. She leads the Lady Comets in rebounds, blocks and scoring with roughly 18 points per game, and Vitrano is counting on her senior leadership to carry the team into playoffs.

“As the year has progressed, we’ve gotten a lot more aggressive as a whole. We’re shooting the ball more. We’re handling the ball better and not turning over the ball as much. We’re rebounding better,” Vitrano said. “We’re improving in all aspects of the game, and the coaching staff is very pleased with how far we’ve come since the beginning of the year.”