Deputies with the St. Charles Parish Sheriff’s Office responded to the report of gunfire in the 200 block of Williams Street in Boutte, LA on Tuesday, January 17, 2023 around 4:20 P.M. The caller reported hearing five gunshots. 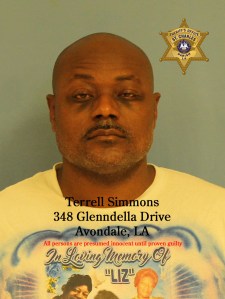 Responding deputies located a vehicle parked in the caller’s front yard that sustained damage from the gunfire to the passenger side mirror. A witness reported hearing five to seven gunshots and observed a white, four-door vehicle with shiny rims and a black stripe leave the area.

A female returned to the scene to report her vehicle had been damaged from the gunfire. She advised, while stopped in traffic on Paul Maillard Road at the intersection of Old Spanish Trail, a white extended cab truck was behind her. The driver of the truck became agitated when she let traffic through, and the driver attempted to drive around her vehicle. She did not let the truck pass her and turned onto Highway 90 after the traffic light turned green. She noticed the white extended cab truck following her and she tried to get away. When she looked in her driver’s side mirror, she observed a male with a silver gun shooting at her. She reported hearing three shots before driving away. The female’s vehicle sustained a bullet hole in the rear hatch that went through the license plate and the rear driver’s side tire was flat.

No injuries were reported from this incident.

Detectives obtained photographic evidence of the white extended cab truck involved and found it was registered to the Enterprise Rental Company. Detectives determined the vehicle was rented by Terrell Simmons, a thirty-nine-year-old male from Avondale, LA.

Detectives applied for and were granted a search warrant for the rental vehicle. Inside the vehicle, Detectives located a handgun and two loaded magazines.

Through investigation, Detectives obtained sufficient probable cause to obtain an arrest warrant for Simmons.

Terrell Simmons was placed under arrest on January 23, 2023 at the St. Charles Parish Sheriff’s Office Headquarters in Luling, LA. Simmons is being charged with Aggravated Criminal Damage to Property and Possession of a Firearm/Carry Concealed Weapon by a Convicted Felon.

Simmons is being held at the Nelson Coleman Correctional Center, awaiting a 72-hour bond hearing.

Based on the information and evidence received, this appears to be a “road rage incident.”

Detectives have determined the white vehicle with a black stripe was not involved.

We are urging anyone with any information including citizens in the area with home surveillance or Ring camera systems to review their video footage and to contact Detective Kevin Tennison with the St. Charles Parish Sheriff’s Office at ktennison@stcharlessheriff.org, (985) 783-6807, or (985) 783-1135.