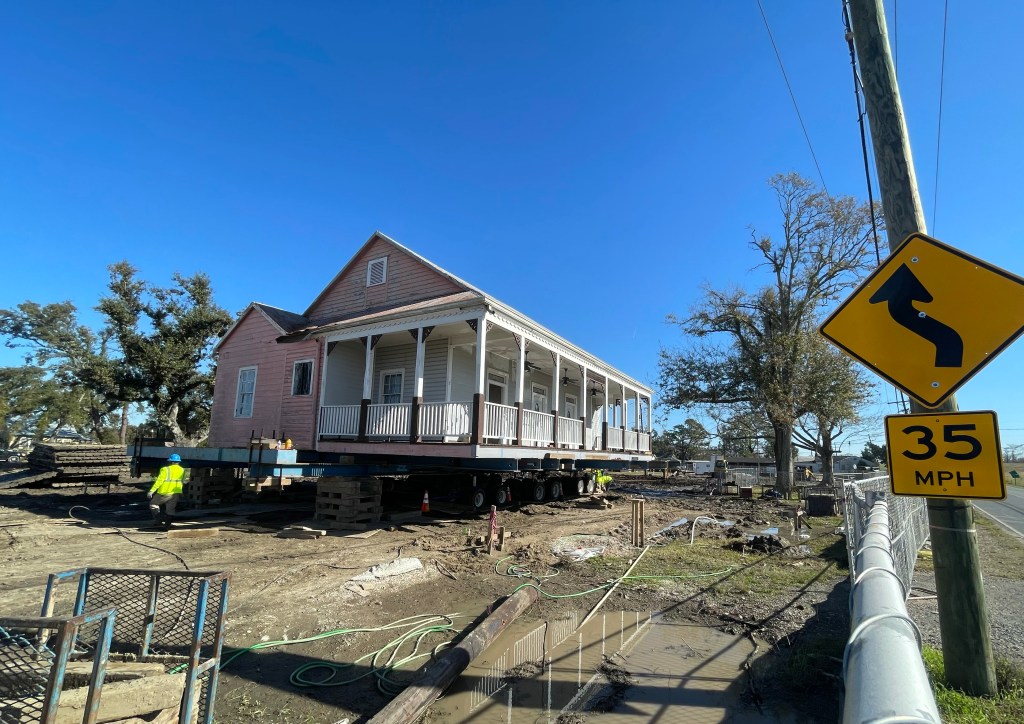 Work crews are seen relocating the 1885/LeBrun house closer to River Road earlier this month in preparation for the new Reserve Library. (Photo submitted by the Honorable J. Sterling Snowdy).

RESERVE — The 1885/LeBrun House that sits near St. John Theatre was recently relocated closer to River Road in preparation for rehabilitation efforts.

Within the next two years, the historic home will open to the public as part of the new Reserve Library branch, serving as a centralized hub to celebrate local history.

According to Library Director Andrea Tullos, the structure once served as a personal home for the LeBrun family. In addition to building records indicating the home was constructed in 1885, a Bible dating back to the 19th Century was discovered within its walls. There have also been stories passed down locally about how the LeBrun family’s daughters used to sit on the levee in front of the house to watch the ships pass by.

The relocation and stabilization of the 1885 House is part of Phase I of the Reserve Library project, which also includes construction of a new building alongside the St. John Theatre at 1480 Highway 44 in Reserve. Estimated for completion in late 2023, the new branch will function as not only an innovative center of learning, but also a state-of-the-art community center and a cultural hub in the revitalization of Reserve with a makerspace, a podcasting room, a library-run café, and gathering spaces for tutoring, small meetings and large events.

An interior refurbish of the 1885 House will encompass Phase II of the Reserve Library project. Once complete, the House will become a space that reflects on local history.

“The house has a lot of historical significance,” Tullos said. “The intent is to restore the facility to be accessible by the public. It will have a really clear identification with all of St. John Parish. We are going to collect from individuals who wrote and produced both physical materials such as books, also recording materials from different musicians who were from St. John Parish, to be able to recognize the talent and the creativity that came from the parish. We want to celebrate all of the communities that make up St. John, and Reserve really is a central location for all of St. John Parish. It will be nice to have each nook and cranny of the parish represented in a more central location.”

According to Tullos, the 1885 House will also feature rotating art collections and a state-of-the art teaching kitchen allowing the Library System to partner with 4-H for cooking classes.

As the House is stabilized, Tullos said extreme care is being taken to preserve the historic details, including windows and other features original to the structure.