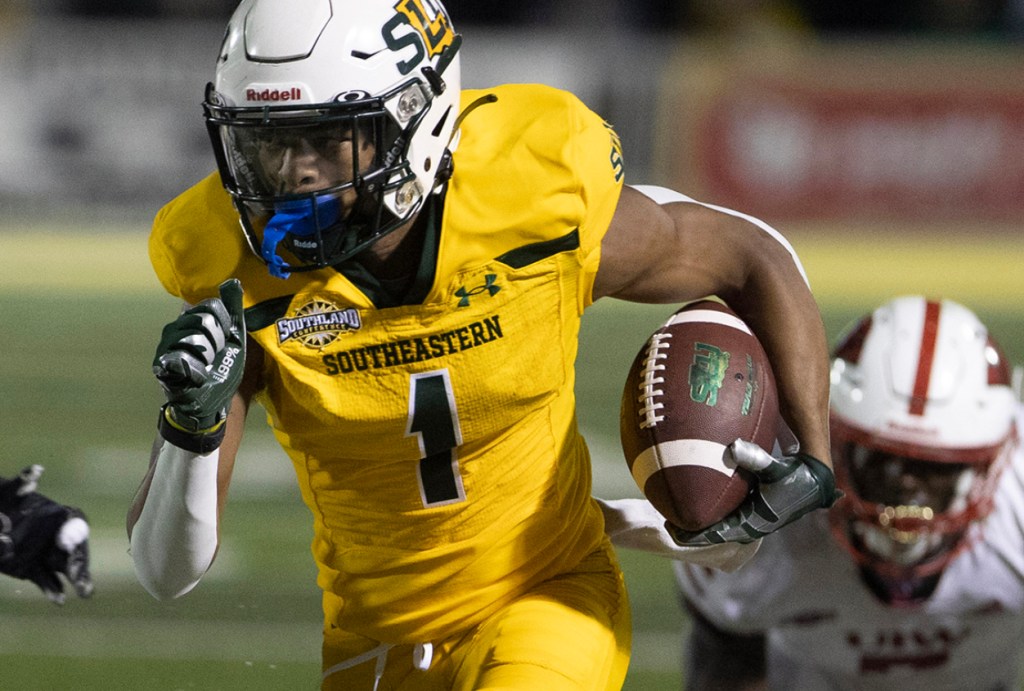 RESERVE — Gage Larvadain, a sophomore wide receiver for the Southeastern Louisiana University Lions and a former Riverside Academy football and basketball standout, recently announced his decision to transfer to Miami of Ohio.

Larvadain made a name for himself at Riverside Academy as a versatile quarterback, wide receiver and defensive back who accounted for approximately 2,400 yards and 33 touchdowns during his high school career. On the basketball court, he was named first team all-state and averaged 27 points, eight rebounds and seven assists while helping his team reach the Division IV state semifinals.

During his first football season with the Southeastern Lions in 2021, Larvadain appeared in 13 games and made six starts at wide receiver. He became the first Lion to be named the Southland Conference Freshman of the Year in 13 years. His other accolades for the season included being named All-Southland Conference at wide receiver (second team) and kick returner (first team) and All-Louisiana honors at return specialist (first team).

On the gridiron, Larvadain caught 37 passes for a total of 521 yards and five touchdowns, and he tied a university record with a 100-yard kick-off return during a win over Nicholls. Larvadain additionally finished with three catches for more than 100 yards, which included an impressive 88-yard touchdown against Northwestern State.

During the 2022 season, Larvadain collected 59 catches for approximately 730 yards and had two touchdowns, in addition to returning 20 kick-offs for more than 500 yards at an average of 25 yards.

Larvadain was also recognized as an excellent student at Southeastern who was named to the academic honor roll.

In December, Larvadain shared the following message to Twitter:

“God has blessed me my entire life, and I’m forever grateful for what He has done and more importantly what He will do for me in my future. Throughout my entire life, I have always dreamed of playing either sport at the professional level, and I appreciate Coach Scelfo, Coach Ant, Coach Kiefer, and the entire HAMMOND, AMERICA for blessing me with the opportunity to better myself in order to make this dream a reality. My two seasons at Southeastern have been very special, and I am proud to be able to call my teammates and I CHAMPS. With that being said, I will be entering the transfer portal with two years of eligibility left.”

Larvadain will now join the Miami Redhawks football team based in Oxford, Ohio. Led by Chuck Martin, the Redhawks compete at the NCAA Division I FBS level in the Mid-American Conference.