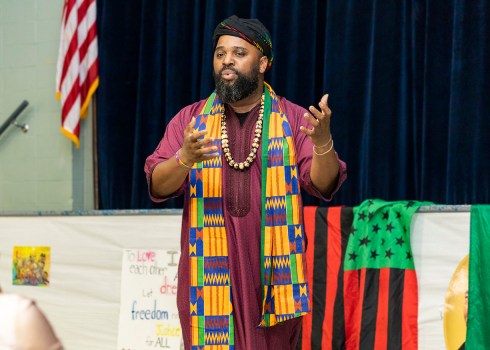 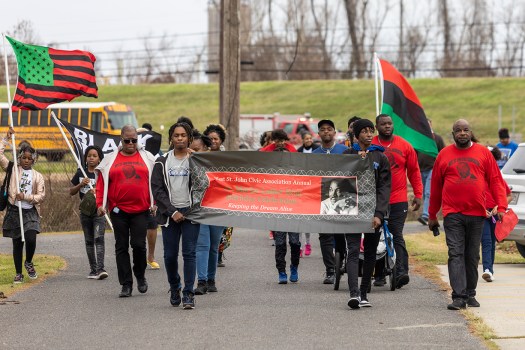 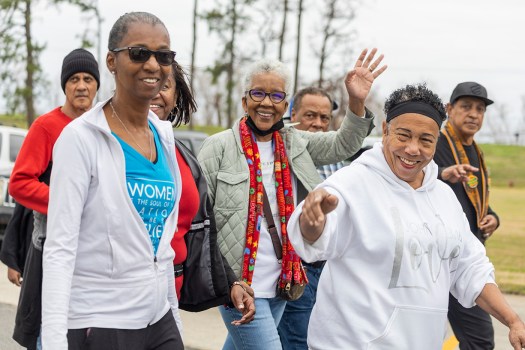 LAPLACE — Just as Dr. Martin Luther King Jr. had a dream, St. John the Baptist Parish educator Derron C. Cook wants all of his students to know how to dream. Most importantly, he wants their dreams to be rooted in service, connected to the welfare of the community.

Cook was the featured guest speaker during the West St. John Civic Association’s annual Dr. Martin Luther King Jr. celebration held Monday in Edgard. The day of service kicked off with a march from the Edgard Library to West St. John Elementary’s auditorium where a program followed to reflect on the theme, “Dr. King’s Legacy: Equality, Peace, and Service: Where are we today?”

Today, Cook shares his voice with the community as second vice president of the St. John Parish NAACP, a member of the Kiwanis Club of the Tri-Parishes, and president of the St. John Parish Association of Educators. While he is a homegrown resident of Reserve and a 1996 graduate of East St. John High School, his plans in life did not always involve the community where he was raised. His educational journey took him to Savannah, Georgia, and then to New York, but the influence of his parents meant service was always top of mind.

After turning 29, Cook was inspired to be of service to underprivileged individuals in South Africa. He posted a website sharing his vision without knowing how he would get there. The very same day, he received a call from someone looking for a traveling videographer to accompany him to Africa. Cook’s first assignment was to an orphanage. His second assignment was at a South African high school, where he found a passion for teaching that extended the three-week trip to four months.

Cook told his mother he was moving to South Africa, but his plans changed on January 9, 2010, when he got the call that his father had passed away. Coming back into town for the funeral, Cook had a dream to return home and start working within the community.

Addressing the question “Where are we today?”, Cook said it’s important to stay steadfast in the goal for equality.

“Right now, our kids are in trouble. Why? Because we’re not sharing the dream,” Cook said. “We need to speak of the days when we had almost nothing, but we had pride. Our families had pride. We need to tell our people where we came from in order to have a road map for tomorrow.”

Organizers of the MLK celebration were encouraged to see young people in the audience, especially the West St. John Elementary Running Raiders, who were honored as grand marshals of the program along with the nine remaining members of the Wantu Wazuri Civic Association, which was founded in 1973 and comprised mostly of St. John Parish educators from the West Bank.

Children in attendance Monday were able to look up not only to the Wantu Wazuri members, but also to a host of elected officials in attendance, including Sheriff Mike Tregre, District Attorney Bridget A. Dinvaut, St. John Parish President Jaclyn Hotard, and several members of the St. John Parish Council.

Students Gala Holden III and Khailin Williams stepped up to the podium to share research they collected on the historical prevalence of segregation and racism in Louisiana. They shared laws that existed in Louisiana prior to the Civil Rights movement, including requirements for the circus to have two ticket offices at least 25 feet apart. Renting housing to Black families, if the property was already occupied by a white family, could result in misdemeanor charges, fines, or even imprisonment. Even schools of the blind were required to be separated by skin color.

Mary Elizabeth Johnson of the West St. John Civic Association said it is an honor to observe Dr. Martin Luther King Day because he set a pattern that countless in America have modeled their lives after to create lasting change.

“We must join the millions of Americans who use this holiday as a day of service and not just a day off,” she said. “We know we have to work hard today, harder than ever, and we must educate our youth because there is still a lot of work to be done, especially in getting them out to vote, become leaders, and most of all, learn how to solve conflicts without violence.”