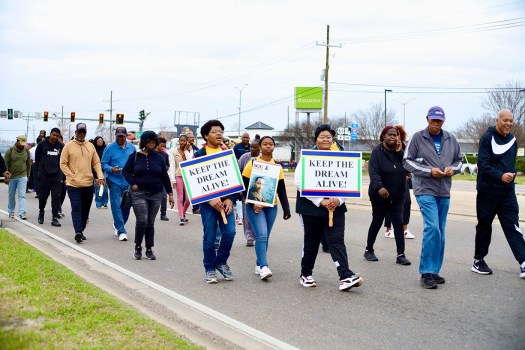 The community came out for the 30th annual MLK Day March & Rally, held on Airline Highway in LaPlace. 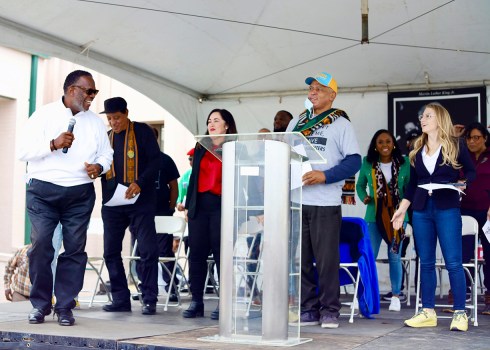 The Rev. Forell Bering is pictured at the microphone as elected officials and dignitaries join him in song.

LAPLACE — To commemorate the 30th anniversary of the St. John the Baptist Parish Dr. Martin Luther King Jr. Day March and Rally, speakers challenged the community to return to the values that King held so closely — courage, truth, integrity, respect and humility.

According to speaker LaToya Haley, the March and Rally was first organized in 1993 by the Rev. Forell Bering as part of Bethlehem Missionary Baptist Church’s Victory Beyond the Wall ministry. In the early days, the march took place on River Road, starting from Our Lady of Grace Catholic Church and continuing to the Reserve public housing complex, where the rally was held.

In 2005, the march moved to Airline Highway, beginning at East St. John Elementary and culminating on the grounds of the St. John Parish governmental complex in LaPlace. The event continued to grow over time with the addition of a poster and essay contest allowing children in grades K-12 to express their knowledge and appreciation of the slain Civil Rights leader.

“While the March and Rally may look different today than it did 30 years ago, the purpose remains the same,” Haley said. “We march in remembrance of those, known and unknown, who willingly sacrificed their lives to stage protest marches, to change the unfair laws and segregation that allowed racism to fester and run rampant, armed only with faith and hope that one day those who came after them would be able to exercise freely their Constitutional rights without fear of retribution.”

“Returning to Our Original Values” was the theme of the 30th anniversary March and Rally held Monday in LaPlace, and St. John the Baptist Parish President Jaclyn Hotard expressed that “hope” was among the most important values of all.

She referred to Dr. King’s words: “If you lose hope, somehow you lose the vitality that keeps life moving, you lose that courage to be, that quality that helps you go on in spite of it all.”

According to Hotard, those words ring especially true today as the community and the nation recoups from the challenges of the past three years.

“There are so many momentary troubles that we have overcome and will continue to overcome. We can look forward to the future with hope. We come together today with the hope that our parish is recovering, healing and thriving with hope for a better tomorrow on the horizon, but also acknowledging there is more work to do,” Hotard said. “Dr. King did not believe it was about one great leader. As great as he was, he believed it was about all of us, together. The entire history of the Civil Rights movement came from everyday people who chose to do extraordinary things; everyday people who strove to do the right thing, even when it was difficult and uncomfortable.”

Hotard challenged the community to not only celebrate King on his designated holiday, but instead strive to actively practice his vision for equality, dignity and respect for all human beings every day, in spite of it all.

Representative Randall Gaines and Barbara Taylor spoke about progress that has been made but emphasized that King’s vision has not yet come to fruition.

“His message of non-violence, peaceful protest and equality is as pertinent now as it was in his lifetime. Also important is the truth and power behind that message and the need we still have for it today in our society,” Taylor said. “As we commemorate this day, we can look at the news and in our communities and see that we still have a significant racial division in our country. The largest protests and even divisions among friends and family shows that racism and discrimination did not end with the Civil Rights movement. Indeed, there is still much work to be done today.”

Gaines said society tends to remember and romanticize the dream and the dreamer, yet falls short of the marching orders he left behind.
“Many of us do not represent and do not follow or repeat his actions, his service and his dedication,” Gaines said.

Valencia Green and Rev. Bering spoke about King’s values, once reflected in the very core of the Black family unit.

Bering recalled how his Daddy taught him to work hard to earn what he wanted and show respect not only for his parents, but for all people. Green spoke about values that may not be taught in school, such as not acting a fool in public, understanding the value of a dollar, approaching people politely, and taking everything to God in prayer.

“The Black family for many generations has been the strength, survivor and elevation. We must get back to every day manners such as excuse me, thank you, you’re welcome, God bless you, and praying as a family. Black culture must get back to honoring your parents with best behavior and words,” she said. “Regardless of how good or bad we feel about our communities, we must acknowledge the need for stronger families. If we rebuild and stabilize the future of our youth, then we are achieving.”