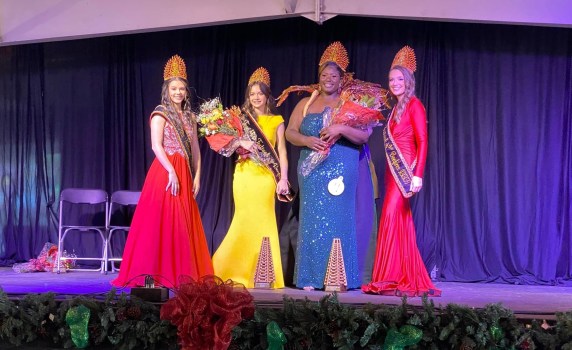 New Festival of the Bonfires royalty Presley Kilburn and Zharia Lemar stand in between the 2021 queens Kami Hymel and Tabitha Detillier. 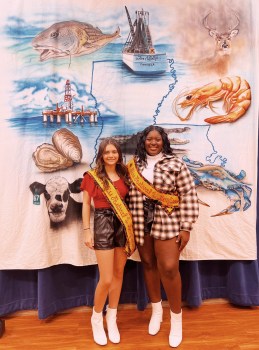 Processed with VSCO with dog3 preset

LUTCHER – Zharia Lemar had never stepped onto a pageant stage prior to being crowned Miss Festival of the Bonfires XXXIII last month in Lutcher.

Lemar is ready to embrace new experiences in 2023 as she travels the state along with the newly crowned Teen Miss Festival of the Bonfires XXIV Presley Kilburn, another newcomer to the pageant scene. In the first weeks of January, the young ladies have already cheered on their rhinestone sisters in the Pasedena Rose Parade and journeyed down to Cameron Parish to attend the LA Fur and Wildlife Pageant.

Following this weekend’s Fur and Wildlife Festival, the queens will close out the first full month of their reign with visits to the Italian Festival Ball and the Southern Magnolia Pageant benefitting childhood cancer.

“Our schedule is completely packed. My team and I decided that we want to go everywhere and anywhere. We’re going to try not to turn down anything,” Lemar said. “I’m going to make it my mission to spread as much information as I can about our festival because it’s unique and amazing, and people need to know about it. Every queen from the past has told me it feels like one year becomes one second, so I’m going to enjoy it as much as I can.”

Lemar was inspired to sign up as a contestant for the 2022 Festival of the Bonfires pageant after cheering on her friend Aubrey Brumfield in the Andouille Pageant back in October. She was initially hesitant due to the stereotypes that surround pageants.

“I was a little nervous because I thought you had to have a certain look. I kind of thought the pageant world would be a little cutthroat and competitive,” Lemar said. “I was shocked by how welcoming and how loving everyone was throughout the process. They made sure I knew that just because I was a beginner, it didn’t mean I had less of a chance compared to anyone else. The directors made us feel completely comfortable, and the previous queens answered any questions we had.”

The day of the pageant started off with an interview. Lemar blew the judges away as she detailed how she would describe a bonfire lighting to a blind person. Then the contestants made up jingles about the Festival of the Bonfires and participated in an evening waltz. Later, on stage, Lemar trembled as a fellow contestant appeared to sweep the floor by picking up all of the smaller awards.

When it was time for the overall winner to be announced, she locked eyes with Aubrey Brumfield in the audience. Then she heard her name. She froze, and tears started streaming down her face.

Lemar joked that she will never live down what happened when she was crowned. The previous queen, Kami Hymel, tried to set the crown on her head as she was crying. The crown fell three times, and the audience alternated between cheers of congratulations and gasps of worry until it was finally secured.

As Teen Miss Festival of the Bonfires Presley Kilburn was crowned, she thought about how she could inspire a generation of future queens.

While this newest achievement represents Kilburn’s first Teen Miss title, she previously served as the Mini Miss Festival of the Bonfires when she was 9 years old and Baby Miss St. James Parish as a tiny toddler.

“This was one of my happiest moments knowing how much I could inspire little girls to follow their dreams and have me as their role model,” Kilburn said. “I don’t see it as a responsibility. I see it as a blessing for me. It gives me chances to show people that the hard work of putting on the festival and lighting the bonfires is all for the laughs and the smiles of others.”

Kilburn has been described as a genuine, caring soul, and she’s happiest when she sees people come together. It brought her joy to watch the lighting of the bonfires on Christmas Eve, when the community braved the freezing temperatures to uphold traditions and make memories together.

“I admire how confident people are in our culture,” Kilburn said. “We are all happy when we’re around each other. With the pageants, I never knew about all of the events the queens go to and how strong the sisterhood is among the queens. It really is special.”

Lemar and Kilburn look forward to traveling with the St. James Sugar Queens and the St. John Andouille Queens to raise awareness for the region.

“Any type of tourism at any time is good for our parish,” she said.

Outside of her Festival of the Bonfires duties, Lemar is an 18-year-old senior at Lutcher High School. She is a member of the Hope Squad, a peer-to-peer prevention group founded in honor of a former student who took her own life in 2018. Lemar was recently accepted into the national Hope Squad Council, where she is among 36 students from across the country who oversees more than 2,000 Hope Squads.

Kilburn, 14, is also involved at Lutcher High School as a member of the Bulldogs’ cheerleading squad and tennis team.