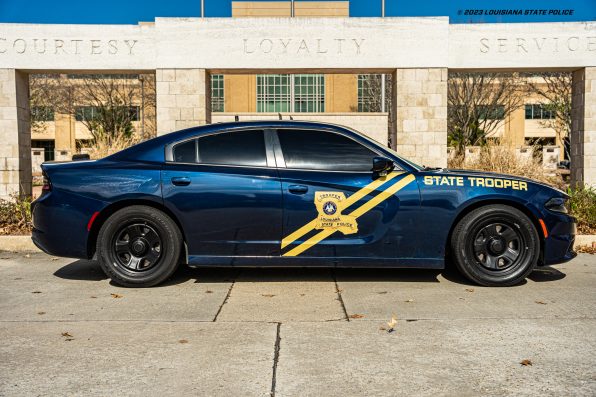 Baton Rouge – Louisiana State Police is an organization with an incredibly rich history. Our motto, “Courtesy, Loyalty, Service,” has given us direction and inspiration over the last 87 years.

Since 1936, our patrol units have changed in type and color over the years.  Motorcycles were exclusively used as patrol units until 1939.  Currently, our white units with red letters have gained fame across the nation as a Louisiana State Police unit. However, for a brief moment in time, our units were navy blue with gold lettering. In 1989, during Governor Buddy Roemer and Colonel Marlon Flores’ administration, our patrol units took on a new look.  They were navy blue, matching the LSP uniform.  Two gold stripes were placed on the side of the unit, symbolizing highway centerlines.

Some of the first units to receive the new look were 18 Ford Mustangs.  The Mustangs were purchased with seized proceeds from drug investigations at the cost of $11,300 per car.  They were equipped with five-liter, 302 cubic inch, fuel injected engines and were chosen for their quick acceleration.  They went from 0 to 60 MPH in 8.6 seconds, as compared to the majority of Chevrolet Caprices in our fleet which took 12.4 seconds to reach 60 MPH.

In 1992, under Governor Edwin Edwards’ administration, the LSP fleet reverted back to the traditional white units and red lettering.  Slight modifications to the design were made over the course of several years to what you see today as the Louisiana State Trooper unit.

As the men and women of this organization prepare for the future, we must reflect on the legacy and heritage left by those who preceded us. Louisiana State Police is proud to showcase our new heritage unit with a color scheme reminiscent of the patrol units from the late 1980’s to the early 1990’s. This Dodge Charger, which has been refurbished from our existing fleet, will be used at recruiting and other community events across the state to help share the story of our past. Be on the lookout for it in your community.

The unveiling video is available to view here: https://youtu.be/smkNegUdm-s

If you are interested in becoming a Louisiana State Trooper, please visit our recruiting page at http://lsp.org/recruit.html or email LSPrecruiting@la.go