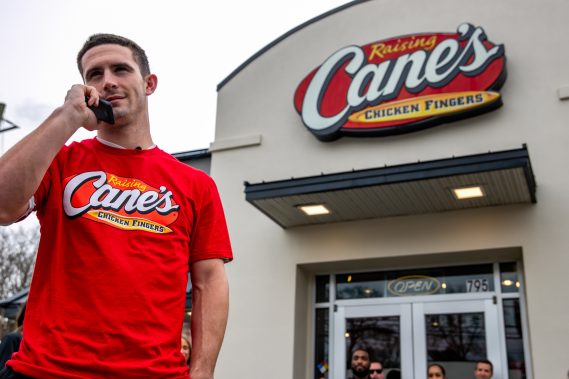 Bennett made history during Monday night’s championship game by leading the Bulldog offense to the most points ever scored in a national championship game, with a 65-7 win over the TCU Horned Frogs. Bennett himself was responsible for six touchdowns, while passing for 304 yards.

On Thursday, Jan. 12, Bennett was joined by Raising Cane’s Founder Todd Graves to continue celebrating the big win. The celebration kicked off with Graves unveiling a new piece of art, a custom-made Bennett portrait that now hangs on the wall of the Athens Restaurant. The pair also made a toast with Bennett’s favorite bourbon – Pappy Van Winkle – and a Chicken Finger meal. Bennett’s celebration of the Championship win last year with Pappy 23 went viral, and his use of a flip phone became iconic. Both were used in a skit with Bennett and Graves during the event.

Stetson then delighted Bulldog fans by taking orders and serving Raising Cane’s Chicken Finger meals in the drive thru and front counter, as well as signing portraits and Bulldogs gear. He even shared an iconic moment with a Customer, letting them know their order total “will be $65 and 7 cents” while working the drive-thru window.

“This has been an amazing season, and winning back-to-back national championships seems almost like a dream,” said Bennett.  “Seeing all these Georgia fans at Raising Cane’s is a great way to celebrate and share it with the most rabid Bulldog fans – the students.”

Last year, Bennett rang in his first national championship title by picking up a shift at Raising Cane’s. The excitement the second time around was enormous, with hundreds of Georgia fans lining up to share the moment with the Heisman-finalist.

“Stetson represents the best in college football, and at Raising Cane’s we like to celebrate with champions,” said Graves, who is also a Georgia-alum. “He has forever burned his name into college football lore and has a bright future.  We are thrilled he could once again spend some time with us and his fans at Cane’s before he starts his next chapter.”

At Raising Cane’s, it all starts with 100% premium white meat chicken tenderloins that are marinated, hand-battered and cooked to order. The menu is also renowned for its craveable – some say addictive – secret-recipe Cane’s sauce, crinkle-cut fries, coleslaw, Texas toast, freshly brewed sweet tea and fresh-squeezed lemonade.

Raising Cane’s is the nation’s fastest-growing chicken finger concept, rapidly approaching 700 restaurants in over 35 states and Guam as it opens 100 new Restaurants in 2023.  The company has ONE LOVE® – craveable chicken finger meals – which includes the iconic “Cane’s Sauce” – named the #1 sauce in the quick-service industry. Raising Cane’s is consistently recognized for being a great place to work – most recently earning them a spot on Glassdoor’s ”Best Places to Work” list, and Forbes’ “America’s Best Large Employers” list. Raising Cane’s was also recently recognized in the inaugural Forbes Halo 100 for excellence in delivering customer satisfaction and brand trust. More information is available at raisingcanes.com.