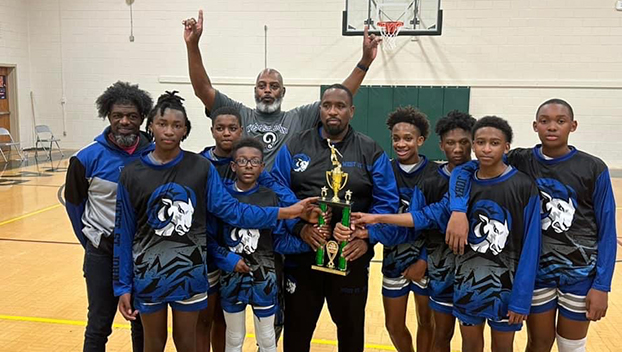 EDGARD — In an addition to the schedule, West St. John Middle School faced Jesuit Middle in the Newman Tournament on January 4.

Coach Courtney Evans knew going into the game that Jesuit would probably be one of the toughest opponents this season due to their depth and how they execute offensively and in their defensive sets.

Jesuit took an early lead, 15-5, in the first quarter. Evans and Coach Morell decided to adjust the Rams players at various positions in the defensive sets to hopefully slow the opponent down. The adjustment worked in the first half, during which the Rams were able to keep the game close at the half with Jesuit leading 32-23.

In the second half, Jesuit’s depth started to take a toll on the Rams because their coach was constantly bringing in resting bodies during the game. The final score was 60-42.

“Despite the loss, I knew this game was needed since we had a tournament in Baton Rouge that weekend to get prepared for January 6-7, and Jesuit would be a team that forces you to play both ends of the floor because of their execution on the offensive and defensive ends of the floor,” Evans said.  “Being able to play bigger schools like Jesuit helps prepare us down the road when we face opponents in our district. I informed our team, we will continue to learn from the wins and losses, but most importantly, continue to play your heart out every game. All year this team continues to impress me each and every game. We are building for the future.”

“My first-time seeing Woodlawn I noticed some of the size of their interior players. Pregame, I informed our team we will have to play a fast-paced game as much as possible,” Evans said.

At the beginning of the game, Woodlawn jumped out to a 13-4 lead. Assistant Coach Morell suggested the Rams should put more pressure on the guards, which would force them to make others have to make decisions within the offensive sets.

Once the adjustment occurred, the Rams began to slowly get back in the game and took the lead at the half, 17-13. West St. John’s best defender, Deavonnii Bartholomew, was huge on the defensive end by making Woodlawn’s best guard work hard to execute their sets. Besides his defense, Bartholomew added seven points. Jajuan Jackson was also huge this game, pouring in 19 points. Colby Evans finished with eight points and hit a key three-point shot in the second half, which pushed the lead to 30-21 at the end the third quarter. The addition of Jerome Jackson Jr. gave the Rams another guard and defender, which helped keep the momentum going. J’kyrin Morris finished with four points and played a major role at the point guard spot. According to Evans, having two-point guards like J’kyrin Morris and Colby Evans allowed flexibility for the Rams.

Despite Woodlawn’s size, West St. John rebounded very well in that game which helped us to secure the 40-26 victory.

The next game was against Southeast Middle School on January 7.

Southeast Middle was the toughest opponent of the tournament,” Evans said. “Southeast has two playmaking guards and athletic bigs that can finish around the basket. From start to finish, it was a defensive battle. Points were earned by both teams. The game was close the entire game. What helped us to secure the victory was relying on what we have done best all season, which is to play defense. We were able to slow Southeast down and prevent them from wanting to score continuously inside because of their size.”

Next up was a game against Central Middle School on January 7. At the beginning of the game, Central reminded the team of the earlier opponent during the week, Jesuit Middle School. They moved the ball well and played good defense.

“We were able to speed up the game which forced Central to play a different style,” Evans said. “This game we were able to cause a lot of turnovers, which helped us to a 12-point victory.”

Due to double elimination, West St. John faced Southeast again after beating Central, in which Southeast was able to secure the victory 25-23 this time around.

This allowed West St. John to face Southeast in the championship.

“Going into the game I knew Southeast was ready for the challenge,” Evans said. “The game started out slow for both teams. Both teams play defense well. We started to push ahead during the first half on the defensive end.”

Colby Evans hit two big three-point shots in the first half. After playing Southeast previously, Evans figured out that the Rams guards can make it difficult for them to penetrate the lane, which can create scoring opportunities for others.

Jajuan Jackson finished in double digit rebounding along with seven points. Southeast bigs are athletic, but Jajuan was able to use his craftiness to secure rebounds and score at vital parts of the game. Davonii Bartholomew was up for the challenge to play defense on their best defender. Colby Evans finished with nine points, while Jajuan Jackson had seven points, J’Kyrin Morris had two points, and Davonii Bartholomew had two points.

“This game showed me as a coach our team is not only talented but is willing to play as a team for the greater cause to win championship games,” Evans said.