Logan Robert Jacob passed away peacefully on January 6, 2023, at the age of 28 after a courageous battle with a rare form of germ cell cancer. 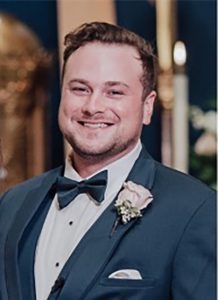 Logan was born to Quinn and Wendi Jacob on December 28, 1994, in LaPlace, LA. After Logan graduated as Salutatorian of St. Charles Catholic High School class of 2013, he earned a Bachelor of Science in Chemical Engineering from Louisiana State University in 2017. Upon graduation, he pursued a career as an environmental engineer and eventually became a process engineer in Texas City, Texas, at Valero.

In 2016, Logan met Chelsea Brossette, and they were married on April 10, 2021. Chelsea was the love of his life and his safe haven. They shared a passion for living and never spent a dull weekend together, especially if it was a Saturday in Death Valley. They loved playing in a beach volleyball league, relaxing with friends at breweries, and celebrating Mardi Gras in New Orleans. Logan was a proud member of the Krewe of Endymion for the past seven years. Even after hearing the devastating news of his cancer diagnosis, Logan and Chelsea decided to spend every day traveling the world. Highlights of their travels include receiving a special blessing from Pope Francis in Vatican City; dog sledding in Juneau, Alaska; and boozing it up at the Guinness Storehouse in Dublin, Ireland. No matter the destination, Logan and Chelsea’s friends and family strived to join them in sharing in their once-in-a-lifetime memories.

Logan was preceded in death by his grandfather, Gus Woodul. He is survived and greatly missed by his loving wife, Chelsea; his parents, Quinn and Wendi; his sisters, Alaina (Ryan) Reed and Caitlin; his brothers, Reed (Kelli), Noah, and Brady; his grandparents, Donald and Jenny Jacob, Gary and Phyllis May, and Candace Woodul; his nieces and nephews, Brynn, Lorelei, Nate, Phillip, Hensley, and Remy. Logan is also survived by his in-laws, David and Kelly Brossette as well as Chelsea’s Maw Maw, Diana Dusang.

Logan’s family would like to express a heartfelt thanks to the compassionate caregivers at MD Anderson especially Dr. Matthew Campbell, Dr. Wen Jiang, and Dr. Yago Nieto as well as nurses and friends, Victoria Ball and Sorayah Bourenane.

All family and friends are invited to attend services on Saturday, January 14th, 2023, at St. Joan of Arc Catholic Church in LaPlace, LA. The visitation will begin at 10:00 am, and the Funeral Mass will begin at 12:00 pm.