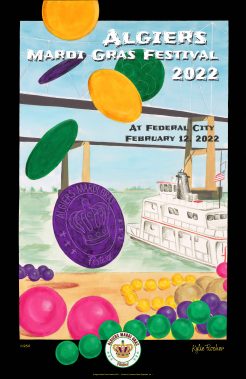 The mile-long parade scheduled for 9 a.m. to kick off the February 4 event will feature marching bands from Alice Harte, Martin Behrman, NOMMA, Edna Karr and L.B. Landry as well as the Krewe of NOMTOC and Mohawk Hunters Mardi Gras Indians.

The free and family-friendly festival aims to bring Mardi Gras to the historic Algiers neighborhood just across the mighty Mississippi River from downtown New Orleans. First held in 2020, the festival is returning for a third time after being cancelled in 2021 due to COVID-19.

“We’re ecstatic to welcome revelers back to historic Algiers for a bigger and better Algiers Mardi Gras Festival,” said event founder and CEO Oscar Rainey. “Our first two festivals were huge hits with families, and we’re committed to bring it back even bigger and better in 2023. We invite everyone out for what will surely become the best free festival in all New Orleans.”

For more information and updates on the Algiers Mardi Gras Festival, visit www.algiersmardigrasfest.com.

About Algiers Mardi Gras Festival
Algiers Mardi Gras Festival is a 501(c) (3) non-profit organization with the mission of celebrating New Orleans culture, Mardi Gras-style, while enriching the education of food, music, arts and crafts amongst students within the community. In addition, the festival’s goal is to contribute to sustaining and promoting economic development within the Algiers business community. The festival is a free family-oriented celebration that promotes cultural diversity. The 2023 festival will be held on Saturday, February4, 2023 from 10 a.m. to 6 p.m. in Algiers.