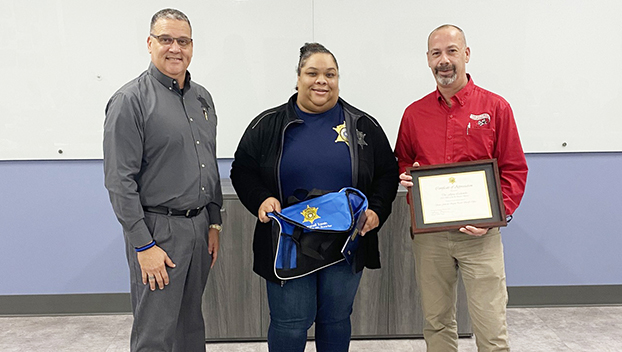 Pictured with Sgt. Karanell Tassin are Sheriff Mike Tregre and Phil Honses from The Flying Locksmiths.

LAPLACE — Sgt. Karanell Tassin has been named Officer of the Fourth Quarter for her outstanding ability to communicate efficiently, effectively, and to show compassion and professionalism as a 911 dispatcher.

On December 15, 2022, Sgt. Tassin received a 911 call from a female who was the victim of a home invasion. The victim was calling from inside her residence in Laplace, and she stated to

Sgt. Tassin that she was uncertain whether the perpetrator was still inside the residence.

Sgt. Tassin assured the victim she would remain on the line until officers arrived. Sgt. Tassin listened carefully to the victim, showed empathy and responded with compassion. In a matter of seconds, Sgt. Tassin was able to acquire a victim’s trust through her calm demeanor and directives. Sgt. Tassin gathered crucial information from the victim to relay that information to responding patrol units.

Sgt. Tassin continued to talk with the victim and advised her of the whereabouts of the responding units including when units were making entry into the home. Only once the residence was secured and checked clear did Sgt. Tassin and the victim disconnect from the conversation.