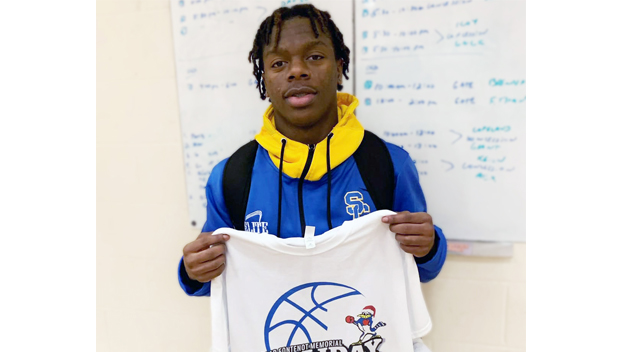 Davon Stirgus was recently named to Brad Fontenot Memorial Holiday Shootout All- Tournament Team. He was the leading scorer for St. Charles Catholic in two of the three games.

LAPLACE — The St. Charles Catholic Comets basketball team boasted a 4-2 record after the first six games of the season.  After getting a late start due to the championship football season stretching well into December, the Comets shifted to basketball mode and competed in the Brad Fontenot Holiday Shootout at St. Edmunds in Eunice December 27-29. The boys faced three quality teams in Notre Dame (5-2), French Settlement (15-3), and Eunice High (6-4), ended the tournament 2-1, and were awarded third place.

“Going into the game, we knew it would be a low-scoring game because of the style Notre Dame plays,” said second-year head coach Zach Weber. “They are very well coached and did a very good job of slowing us down. I was very proud of the way our guys executed down the stretch and made their free throws when it counted. I’m also very proud of the minutes and production we got from our bench down the stretch.”

Kenneth Hall led in scoring with 11 points and six rebounds. Other top contributors were Kayden Cambre with nine points and three steals, Austin Catalano with six points, and Daniel Joseph with five points and eight rebounds.

St. Charles Catholic lost to a very talented French Settlement basketball team 44-36. Weber said French Settlement shoots the ball very well and was averaging 68 points per game going into the match-up against the Comets. St. Charles did a decent job of making it difficult for the opposing shooters.

After falling down by eight points in the first quarter, the Comets fought their way back into the game and were only down by one point at the half. The game was tied at 35-35 with three minutes remaining in the fourth, but a handful of missed opportunities at the end of the game allowed French Settlement to capitalize on scoring.

Davon Stirgus was the leading scorer for the Comets with 16 points and six rebounds, followed by Brady Burns with eight points and five rebounds and Hall with seven points and four rebounds.

Next up was Eunice, and the Comets reigned victorious 44-37.

“Eunice is a very athletic and quick basketball team. They averaged 6’1 to 6’2 in height on the court,” Weber said. “I thought this was the most impressive win of our season so far. Besides playing a very sloppy first quarter, we put together three solid quarters after. I was very proud of the way our guys responded after the first quarter and never panicked.”

Stirgus was once again the leading scorer for the Comets, this time with 22 points and four rebounds. Hall followed with six points and eight rebounds, and Burns had five points and three rebounds.

“We were very pleased with the way our team handled themselves during this tournament, being it was so early in our season and being that we’ve only played six games. We were able to see three different styles of basketball teams, and I thought it was a great opportunity for our basketball team to see that so early in the season,” Weber said.

The schedule is as follows: