Weather threat for Tuesday has increased 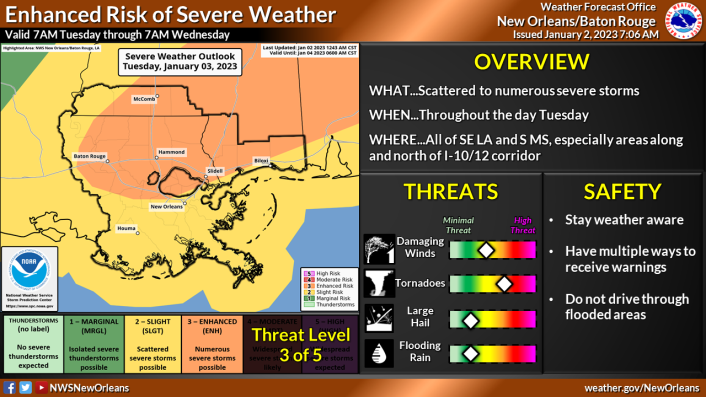 WHEN:  Dense fog today through 9-10 AM inland and midday along the coast. Severe weather and heavy rainfall threat will be from early Tuesday morning through Tuesday night but the greatest risk is expected from late morning through sunset Tuesday.

WHERE:  All of the area for fog. Same for severe weather but the greatest risk will be along and north of I-10/12.

CONFIDENCE: High confidence for fog today. Confidence in the redevelopment of dense fog tonight is moderate but there is uncertainty if the dense fog will be quite as intense and widespread as it was last night, especially further inland. There is medium confidence for severe weather on Tuesday as confidence has increased regarding potential for severe storms. However, there is still some uncertainty regarding the exact timing and placement of these storms and there could be more than one round to track.

The main impacts from the dense fog will be:

The main thunderstorm threats will be: