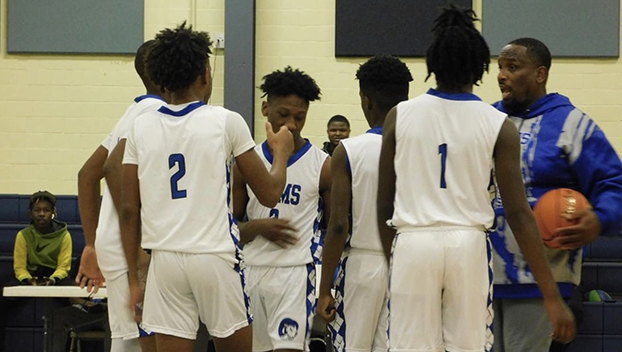 EDGARD — West St. John Middle School faced the White Castle in a packed gym on Thursday December 28, 2022, at the West St. John Elementary Gym. This game was highly anticipated since they are in the 1A division.

In the first quarter, WSJE jumped out to a 13-2 lead by full court pressing, which turned turnovers into points. Coach Courtney Evans informed the team members that they must continue to execute on the defensive end.

According to Evans, what also helps with the improvement of the team is the addition of PG/SG Colby Evans.

“Adding Colby to the lineup helps the team on the offensive end because of his scoring ability, but most importantly his passing ability to get other players involved,” Evans said. “On the defensive end, Colby is long and can make it difficult for smaller opponents to execute their offense during our defensive sets.”

At the half, the score was 31-9. Jajuan Jackson was unstoppable in the first half, finishing with 23 points at the half. During halftime, Evans informed the team they must continue to keep pressure on the offense to maintain the lead since giving any sense of hope to White Castle could lead to them coming back from the deficit.

In the second half, West St. John Elementary performed proficiently to the end of the game with a 60-17 victory.

“This season, we have been battle tested and overcome obstacles. I informed the team that we enjoyed the win, but learned from the wins and losses, and we still have more work to do,” Evans said.

The young Rams enter 2023 with an impressive 11-1 record. The team looks forward to the following: