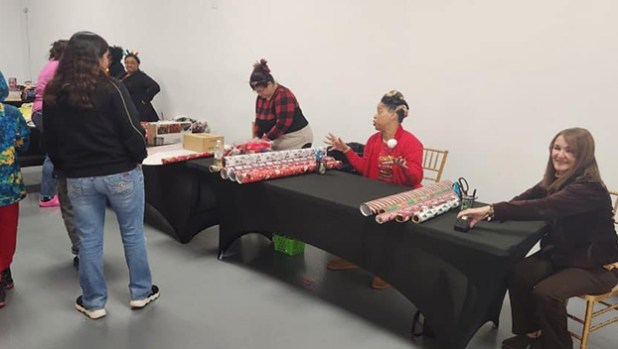 Complimentary gift wrapping was offered during the event. 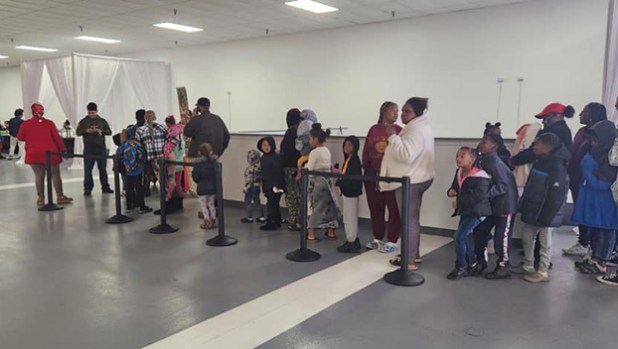 A line formed as 200 children came out to the inaugural event, held the week before Christmas at 321 Events in LaPlace. 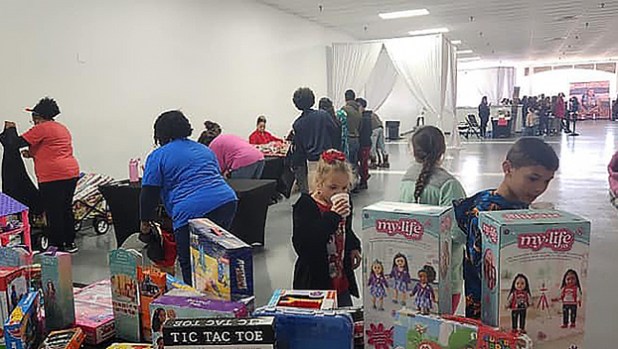 LAPLACE — Chartered in February, the Kiwanis Club of Tri-Parishes closed out 2022 on a positive note with a Christmas toy giveaway that reached approximately 200 local children.

The inaugural giveaway was held December 18 at 321 Events in LaPlace. It was truly a community effort, according to Dayna James, president of the local Kiwanis chapter.

The event space was offered courtesy of LaChandra Morris, and toys for boys and girls of all ages were acquired through a community partnership with Denka Performance Elastomer. All of the local vendors featured at the event also donated a toy toward the drive.

LaPlace Attorney Sylvia Taylor and her staff sponsored an appearance from Santa Claus. Meanwhile, Kiwanis members Justin Goings and Richard Broussard of Edward Jones Financial Advisors donated money to cover the expenses for each family to receive a printed photo with Santa.

Monique McGee-Duronslet brought the Zora Christina food truck on-site and handed out free French fries to the children and adults as they waited in line. A hot chocolate bar operated by college volunteers was also offered to families as they waited. Around five children at a time were able to pick out a special gift from the tables where toys had been organized by age group.

Free gift wrapping was also offered during the event to those in need.

“I was surprised that the word had gotten out so far because we only did social media marketing, and it was our first annual giveaway,” James said. “We are going to continue it every year, and hopefully next time it will be bigger and better than it was this year.”

While the Tri-Parishes Kiwanis Club is new to the community, Kiwanis International has been active in the United States for more than 100 years. The organization traces back to a group of businessmen in Detroit, Michigan, and the Kiwanis name was inspired by a Native American expression translating to “We Trade.” Five years after the organization was founded, the motto of the Kiwanis Club shifted from “We Build” to “Serving the Children of the World.”

The focus on serving children has continued to this day, according to James.
“Everyone was eager to get involved and start working. We wanted people to know that we are here. We’re not here to compete against any other organizations. We’re here to partner and network,” she said.

Kiwanis Club of the Tri-Parishes serves St. John the Baptist, St. James and St. Charles parishes under one umbrella. The first event of 2022 was a membership drive at PJ’s Coffee in LaPlace in which coffee and king cake was provided to the first responders in the community. Free coffee and refreshments were once again provided to first responders during the second membership drive, held at The Ferry Landing in St. James Parish.

President Pete Dufresne of St. James Parish and President Matt Jewell of St. Charles Parish attended the Kiwanis Club’s first meeting in the parishes they represent, and James hopes to bring in President Hotard as a featured speaker during one of the St. John Parish meetings in 2023.

As the local chapter grew in size and the sun began to rise on a new school year, the Kiwanis members jumped into action. The club participated in a back-to-school teachers’ bash, partnering with Pastor Steven Allen to donate 500 donuts and coffee for educators.

In September, the Kiwanis Club organized the first large-scale career fair in St. John Parish with help from Karla Morris, the chapter’s education committee chair who also serves as a representative of Junior Achievement. The career fair attracted more than 500 high school juniors and seniors from East St. John, West St. John and STEM, in addition to more than 100 vendors representing a wide array of colleges and businesses within the community.

The next event was the Princess Tiana Tea held at Belle Terre Country Club in LaPlace. Kodi Duncan played Princess Tiana, and more than 100 girls came out dressed up as lovely princesses.

Plans for a Halloween Trunk-or-Treat fell through with weather concerns, but James said it will make a comeback in 2023. The Tiana Tea will also be returning this year, this time with more princesses and entry to a play at the Lafon Performing Arts Center.

Other goals for the next year include forming partnerships with principals in the local school systems and organizing a Martin Luther King breakfast event.

“We’ve been working hard, and hopefully this year we will be able to bring in more fundraisers and events to help the community grow,” James said.

The Kiwanis Club of Tri-Parishes welcomes anyone who wants to help the children and teachers of St. John, St. James and St. Charles parishes. Meetings are held on the second and fourth Tuesday of each month.

More information on upcoming events and meeting locations can be obtained by contacting James at 504-319-2483 or visiting the Kiwanis Club of Tri-Parishes Facebook page.