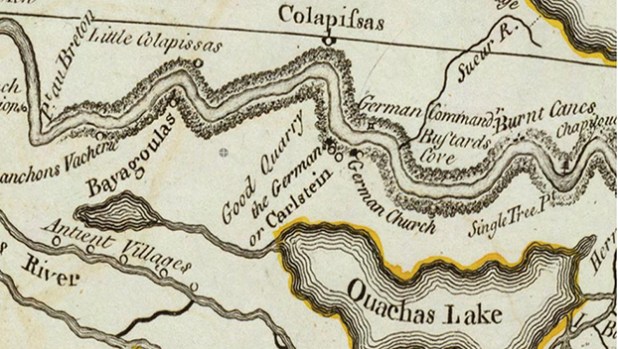 This 1775 map in English shows “the Germans or Carlstein” on Louisiana’s “German Coast” along the Mississippi River (at the top of this map segment). Today Carlstein/Karlstein (near the center of this map) is the town of Des Allemands north of Lake Salvador, labeled Ouachas Lake on the map. The lake has had various names and spellings, but is known today as Lake Salvador. PHOTO: Wikimedia Commons 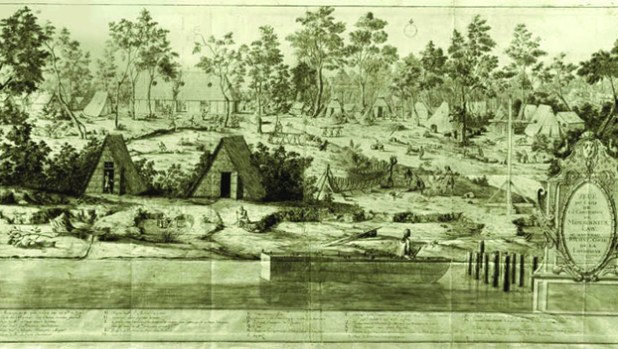 St. John the Baptist Parish was the second permanent settlement in Louisiana and established in the early 1720's by a group of Germans, hence becoming known as "La Cote des Allemands" or "The German Coast". Led by Karl Frederic D'Arensbourg, a settlement was created on the west bank of the Mississippi River in the area now known as Lucy which was originally named Karistein. Some families also began farming land on the east bank, in what is now Garyville and Reserve. Courtesy St. John the Baptist Parish

Louisiana: The Pelican State, the Bayou State, the Creole State… No. None of Louisiana’s nicknames, official or otherwise, offer even a hint of how much of an impact German-speaking immigrants have had on the state. In fact, despite having lived in Louisiana as a university student, I had delayed my research for the state, leaving it as one of the last ones I was working on for a survey of German place names in the United States, thinking it would have very little in the way of Germanic connections. Boy, was I wrong.

Obviously, the state is more associated with French than any other language or culture. (Does “French Quarter” ring a bell?) But Louisiana (La Louisiane), named after Louis XIV, King of France from 1643 to 1715, is full of multicultural surprises. The first European explorers to visit Louisiana (in 1528) were Spanish. However, their interest in the region soon faded, only to be revived 150 years later.

In 1682 the French explorer Robert Cavelier de La Salle dubbed the region Louisiana to honor the aforementioned king. In 1699 the first permanent settlement in the territory, Fort Maurepas, was founded near present-day Biloxi, Mississippi by Pierre Le Moyne d’Iberville, a French military officer from Canada.

The boundaries of Louisiana and the lands claimed by France and other European powers changed over the decades. The vast territory was pared down later to the territory roughly south of present-day Illinois and the Great Lakes. The western boundary extended farther west than today. But Mobile (Alabama) and later Biloxi first served as the capital of La Louisiane. Before the United States acquired the territory in the Louisiana Purchase of 1803, France and Spain both made efforts to control New Orleans and the lands west of the Mississippi. New Orleans (La Nouvelle-Orléans) was founded in 1718 by Jean-Baptiste Le Moyne de Bienville.

But guess who showed up in the territory only two years later. The Germans. To be more specific, German-speaking colonists from the Rhineland, Alsace, Strasbourg, Baden, Bavaria, and even Switzerland. The area they settled is known as the “German Coast.” Some of their descendants can still be found in Louisiana today.

Augsburg, Hoffen, Karlstein, and Marienthal
Around 1720, German immigrants settled along the lower Mississippi River in a region 25 miles upriver from New Orleans that came to be called the “German Coast.” The area that today encompasses parts or all of St. Charles, St. John the Baptist, and St. James parishes was largely settled by German immigrants. Four settlements named Augsburg, Hoffen, Karlstein, and Marienthal were established in the area. The German colony, led by the ethnic German Karl Friedrich D’Arensbourg (who lent his first name to the Karlstein community), was crucial to the development of New Orleans, providing food and other vital supplies to the city. So vital, that the Orleans territorial governor later asked for a second group of Germans. They arrived in 1730.

If you look for Augsburg, Hoffen, Karlstein, and Marienthal in Louisiana today, you won’t find them on a map. Augsburg and Marienthal were destroyed in a 1722 hurricane. Augsburg was located where the Waterford nuclear plant is today. Marienthal is now the site of a Union Carbide plant (near Taft). Hoffen stretched along the River Road from today’s Hahnville (named after German immigrant Georg Hahn) and south to what used to be Karlstein (also Carlstein), today’s Des Allemands, a community of just over 2,100 residents (2020) located north of Lake Salvador. Des Allemands (French for “of the Germans”) is located in southern St. Charles Parish and northeastern Lafourche Parish on the Bayou des Allemands (“German bayou”). Nearby is Lac des Allemands (“lake of the Germans”).

We’ll look at other Germanic places and connections in Louisiana below. But first, a look at Zeitungen.

Der Deutsche continued to publish in German for about six months as an independent newspaper. After 15 June 1840, it featured articles in both German and English. At the same time it gave up its independence and became an organ of the Whig party. After Benjamin Harrison was elected president, the newspaper ceased publication in November 1840. But other German publishers kept German-speaking readers in New Orleans well informed. The first edition of Der Deutsche Courier appeared on 8 January 1842. The biweekly leaned Democratic and cost $8 per year. Among other news, the Courier announced the formation of various German Catholic and Protestant religious congregations in the city. Like most early German-language newspapers in the US, the Courier also published a lot of news about current events and politics back in the homeland (Bavaria, Prussia, Austria, Switzerland) and Europe. But German papers also helped integrate German-speaking immigrants into American life, informing them of their legal rights, and acquainting them with American customs.

Between 1839 and 1917, dozens of German-language newspapers were published in New Orleans and Lafayette, Louisiana. Some of them lasted only several months, while others were on newsstands for decades. A few had fun, unusual names: Der Alligator and Die Glocke (“the bell”) appeared in New Orleans around 1850. Most had conventional titles: the Louisiana Zuschauer (“observer”) in Lafayette, the New-Orleans Tägliche Deutsche Zeitung (“daily German newspaper”) and Das Arbeiterblatt (“workers’ paper/page”) in New Orleans.

Let’s move on now to Hamburg, Jena, Minden, and Vienna – all in Louisiana. What the Pelican State lacks in German town names, it makes up for with its many German immigrants, some of whom became prominent and wealthy citizens in the state.

Hamburg
An unincorporated community in Avoyelles Parish. The population was 280 in 2010. The name comes from early German settlers in the area.

Jena
Jena (2020 pop. 4,155) is the parish seat of La Salle Parish. The town was named, a bit indirectly, after the Thuringian university city of Jena, Germany. But the claim on the town’s official website that the Louisiana town was named after Jena in Illinois runs into a small problem: There is no Jena in Illinois. Further research is required. The Louisiana Jena is pronounced GEE-nuh by locals.

Lac des Allemands
A 12,000-acre (4,900 ha) lake located about 25 miles (40 km) southwest of New Orleans, in Lafourche, St. Charles, and St. John the Baptist Parishes. The lake’s name is French for “Lake of the Germans,” referring to the early settlers who inhabited that part of Louisiana.

Luling
An unincorporated community of 13,716 souls in St. Charles Parish. Luling was named after cotton merchant Florenz Albrecht Luling (1828-1906), born in Bremen, Germany on 20 February 1828. After arriving in the US, Florenz Luling became prosperous in the cotton and tobacco trade in New Orleans where he owned a mansion just off Esplanade Avenue that still stands today as an apartment house. In 1868 he bought Ellington Plantation and other properties near a community originally named St. Denis and later Gassenville before it became associated with Luling and took on his name.

Minden and the Germantown Colony
Louisiana is one of the half-dozen or so US states that have a community named Minden. Louisiana’s Minden is a small city of almost 12,000 residents that is the parish seat of Webster Parish, located 28 miles east of Shreveport. Minden was established in 1836 by Charles Veeder. He named his town after the German city of Minden, the home of Veeder’s ancestors in Germany. The town soon became the largest in what was then Claiborne Parish. In 1849 Veeder left Minden for the California Gold Rush, but the community he left behind thrived without him.

A year before Veeder arrived, in 1835, a group of German utopians who had followed the mystic “Count Leon” (real name: Bernhard Müller) to North America and established a settlement seven miles northeast of Minden. Via Pennsylvania, the colonists settled in Louisiana. The Count had died at an earlier settlement and the group was led by his widow the “Countess von Leon.” The colony site was chosen to align with the latitude of Jerusalem. There, they planned to await the Second Coming of Christ. For nearly four decades this unique religious utopian colony operated successfully leaving a unique cultural impact on the Minden area.

Roberts Cove
An unincorporated scattered rural community in Acadia Parish. The St. Leo’s Catholic church complex serves as a community and cultural center, located three miles northwest of Rayne, Louisiana. Roberts Cove was first settled in 1881 by German Catholic families fleeing the communities of Gangelt and Geilenkirchen (now in North Rhine-Westphalia, Germany) to avoid religious persecution and military impressment. The community’s story goes back to 1867, when Rev. Peter Leonard Thevis, a native priest of Langbroich, North Rhine-Westphalia, Germany, was asked to come to New Orleans by Archbishop Jean-Marie Odin, due to the large number of German immigrants in Louisiana.

Vienna
A town (pop. 483) in Lincoln Parish, in north-central Louisiana. Daniel Colvin settled near what is now Vienna around 1812. Colvin operated a store and relay station. The first post office in the region opened in 1838. Originally known as Colvinsville, the name was changed to Vienna in 1850.

Do you know a German name or connection for Louisiana that we missed? Please let us know.

Our 200+ information pages and the German Way Expat Blog make up an indispensable reference to the common as well as the divergent cultural traits of German-speaking people in Germany, Austria, and Switzerland. Familiarity with the varied ways in which these people celebrate holidays, interact with one another, eat, dress, and so on will increase your ability to adjust to life there – whether you are living there or just passing through.