(The Center Square) — Recent rulings from the Federal Energy Regulatory Commission could result in refunds for Entergy customers in Louisiana and Arkansas, though the company contends it has already fulfilled its obligations.

The two FERC rulings issued on Dec. 23 stem from multiple disputes regarding rates and taxes tied to operations at the Grand Gulf nuclear plant in Port Gibson, Mississippi, which is run by Entergy subsidiary System Energy Resources, Inc.

One of the rulings affirmed a 2020 decision that found SERI failed to reduce its rate base for taxes it collected from customers but did not forward to the government. The issue centered on an “uncertain” tax deduction for the future cost of decommissioning the Grand Gulf plant, the largest nuclear reactor in the U.S.

The 2020 decision ordered SERI to pay $334 million in refunds plus interest, but the FERC ruling on Friday expanded the earlier order to include refunds for items not included in the initial calculation, according to the Louisiana Public Service Commission.
Download PDF 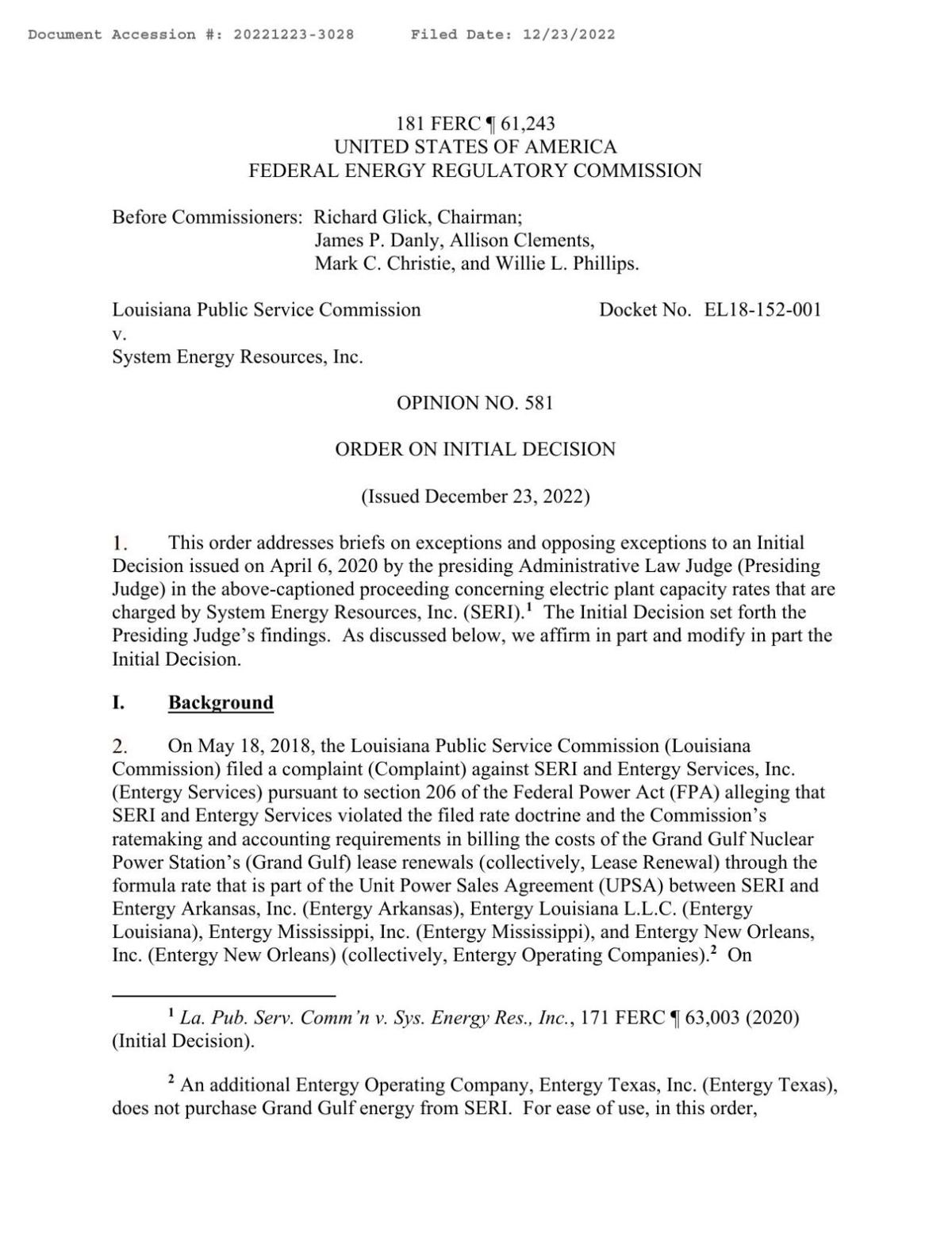 “The LPSC, New Orleans Council, and Arkansas Public Service Commission estimated the damages for the failure to reduce SERI’s rate base for tax collections to be more than $850 million. Based on the FERC decision, the amount distributed to customers of Entergy Louisiana, Energy New Orleans, and Entergy Arkansas would be approximately $510 million,” an LPSC statement read.

The LPSC contends the FERC decision found SERI also is liable for an additional $150 million for not properly accounting for a sale/leaseback arrangement.

In a separate decision on Friday, FERC ordered Entergy to also return excess deferred taxes it collected associated with the Tax Cut and Jobs Act attributed to its uncertain tax positions.

“Entergy has already refunded a portion of these deferred taxes and a compliance filing will determine if any additional costs associated with their improper retention of those taxes is owed to customers,” the LPSC statement read. 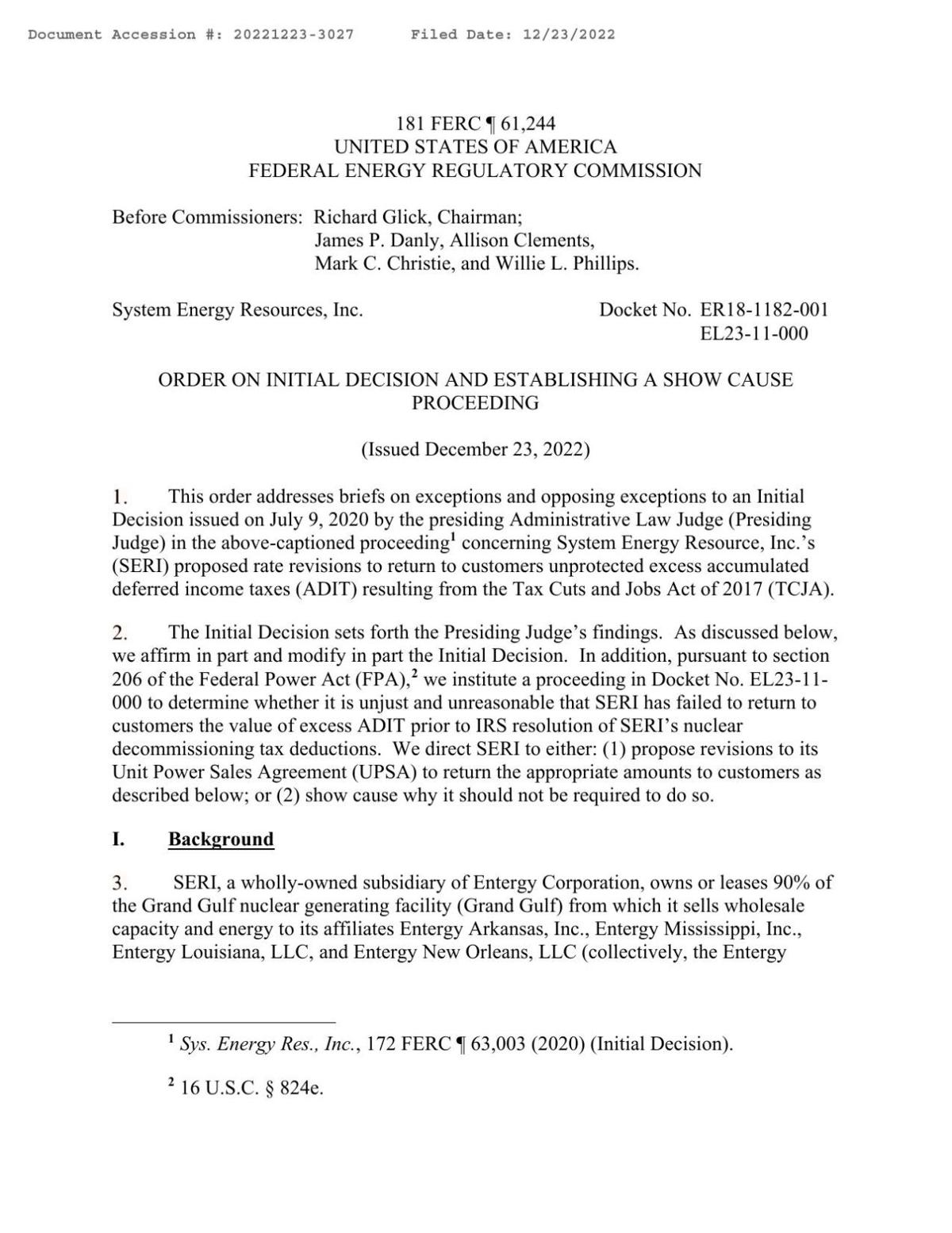 Entergy has disputed the LPSC’s calculations for refunds and alleged in a statement last week that the company owes nothing to customers.

“The remedy in FERC’s order directed SERI to compute a refund based on the accumulated deferred income tax, or ADIT, amounts resulting from the IRS’s partial allowance of SERI’s 2015 decommissioning uncertain tax position. Consistent with FERC’s order, upon resolution with the IRS of the 2015 uncertain tax position, SERI began to provide an ongoing rate base credit for the ADIT associated with the successful portion of the uncertain tax position, which is estimated to result in a benefit of $69 million to customers over the remaining expected life of Grand Gulf,” the Entergy statement reads.

“Additionally, in 2021, SERI provided a one-time credit of $25 million inclusive of interest for the ADIT created by the 2015 decommissioning uncertain tax position, which is consistent with the directive of FERC’s order. Therefore, SERI’s position is that it has already satisfied the remedy required in FERC’s order.”

The company said it would seek a rehearing on the sale leaseback ruling, which it calculates will cost the company $10 million per year

“We believe Friday’s FERC orders are a positive step toward resolving a number of long-standing issues raised by our retail regulators. While we disagree with some elements of FERC’s findings, in particular its ruling on the sale leaseback claim, we are pleased that FERC’s remedy results in no additional refunds due to customers beyond those already provided in 2021 on the uncertain tax positions taken by SERI,” Entergy CEO Drew Marsh said.

“For reasons unknown, Entergy is attempting to mislead its customers, investors and the public regarding the consequences of FERC’s findings of unjust and unreasonable conduct by SERI,” LPSC Chairman Lambert Boissiere said.