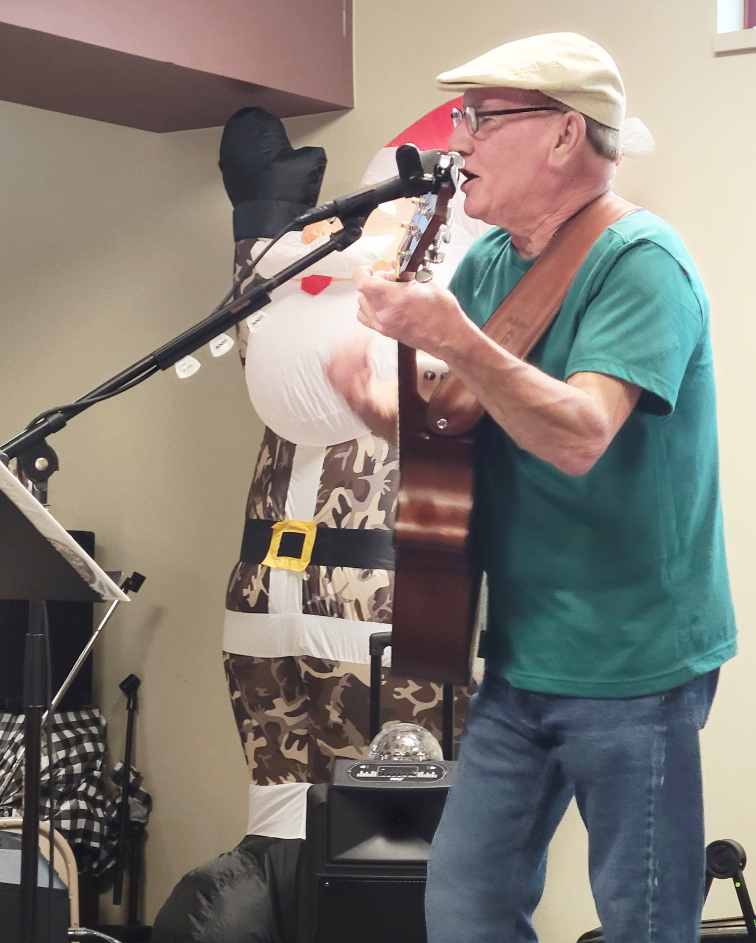 RESERVE — When local musician Robbie Matherne volunteers his time at the Southeast Louisiana Veterans Home in Reserve, he feels like he’s performing at Carnegie Hall.

This year, Matherne started a new monthly tradition of performing at the Veterans Home and an assisted living center in Luling. Unlike his usual gigs, when it comes to giving back to the elderly members of the community, Matherne does not charge a dime.

“Those folks are my happy place. It’s a good feeling when I see them enjoying the music,” Matherne said. “Sometimes they don’t move for a while, then I see them wake up. They will get up in their walkers and dance around, and you can see they are feeling that groove that they were feeling back in the day.”

Matherne started his music career in the third grade back in 1969. He was only 9 years old when his parents bought him a small acoustic guitar, paving the way for him to start his first band, “The Young Dreamers.”

The band initially started out as a trio featuring Matherne and two teenage girls who also played guitar. One of them was Matherne’s back door neighbor, Susan, who would often teach him chords on the guitar. Based in Luling, The Young Dreamers started out playing music for talent shows and eventually progressed to performing at LSU and Tulane frat parties. The young band even performed for President Gerald Ford during one of his visits to Louisiana and broke the attendance record on the S.S. President River boat to the point where there were too many people to set sail.

“We ended up playing 1969 through 1977. Members left, members joined, but by the time we finished playing in ’77, we had an eight-piece band – a five-piece rhythm section and a three-piece horn section,” Matherne said.

After being booked nearly every weekend through his senior year of high school, Matherne ended up leaving the band due to burn out, but he wasn’t able to stay away from music. Later on, he started performing during wedding ceremonies and receptions. After getting into Holy Family’s choir in Luling, Matherne reconnected with his former guitar teacher and started a duo. Together, they played at the Esperanza restaurant in Luling every Friday and Saturday night for seven-and-a-half years. The band also performed at weddings, political parties and other events.

Once the duo dissolved, Matherne began working solo and developed a repertoire of things he could do by himself, focusing on exclusively acoustic performances without background music.

Matherne is continuing to perform at graduations, birthdays and other private parties. His music consists of soft rock favorites of the 60s and 70s, sometimes dipping into the 50s.

Around summer 2022, a friend suggested Matherne visit the Azalea Assisted Living Center, and the experience touched his heart, prompting him to return several times. Four months ago, he added the Southeast Louisiana Veterans Home to his list of appearances, and he’s already been invited to return in January, February and March.

According to Matherne, some of the residents’ favorites are “In the Still of the Night,” “Wasted Days and Wasted Nights,” “Proud Mary,” “How Sweet it Is,” and “I Can’t Help Falling in Love.”

“I didn’t realize that all these folks were well entertained throughout the entire month. It’s a happy place. I believe it’s better to give than to receive, and it’s a reward in itself to perform for them because they have so much appreciation in this really cruel world,” Matherne said. “These people are just one in a million. They are very respectful and very, very grateful.”

When he’s not volunteering his time at Azalea or the Veterans Home, Matherne can be found performing at Las Rosas in Luling, El Paso in Gonzales, La Catrina in Ponchatoula or at various private parties. For more information about his music career, find Robbie Matherne on Facebook.