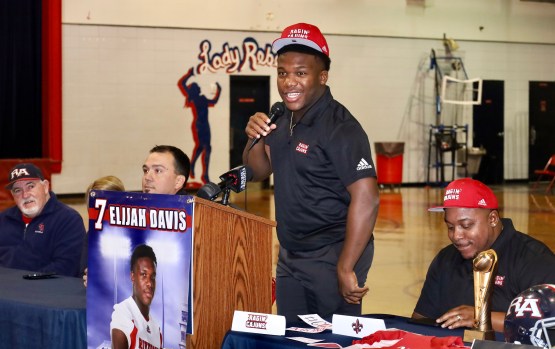 Bill Davis speaks about his college choice just before signing his National Letter of Intent in the Riverside Academy Gymnasium. 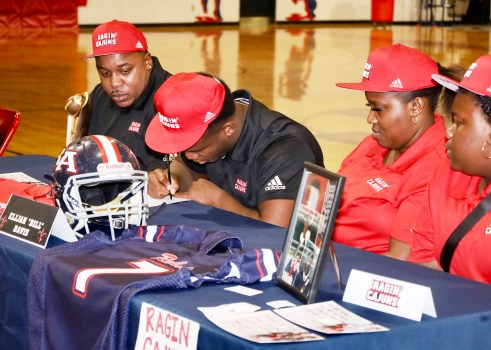 Bill Davis signs his National Letter of Intent to play football for the University of Louisiana at Lafayette Ragin’ Cajuns. 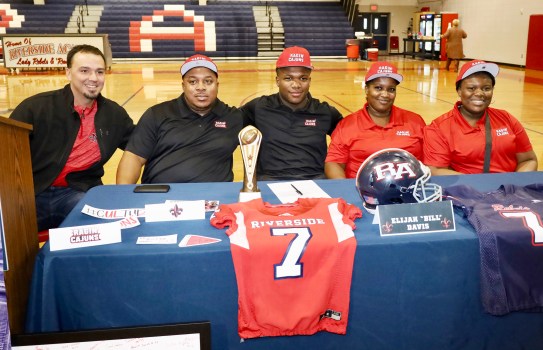 LAPLACE — Six months after committing to play football for the University of Louisiana at Lafayette Ragin’ Cajuns, Elijah “Bill” Davis signed his National Letter of Intent December 21 among family, friends and teammates in the Riverside Academy gymnasium.

Davis is coming off a massively successful senior season that kicked off with 31 carries for 304 yards and a whopping seven touchdowns for a 62-23 win against St. Thomas Aquinas. Throughout the rest of his senior season, Davis would rush for more than 2,000 yards and 36 touchdowns. He ends his high school career with roughly 4,500 rushing yards.

According to Coach Lee Roussel, Davis has received GNO Player of the Week, first team all-district and District MVP honors while going up against some of the most talented running backs in the league.

“I’ve only gotten to spend one season with him, but it was a special one,” Roussel said.

Roussel emphasized the significance of securing a football scholarship.

“Whether Division I, II or Division III, you are blessed to have these opportunities. You are looking at more than $100,000 in academic money,” he said.

Davis was joined by parents Michael and Kameshia Davis and sister Michaela Davis as he signed his National Letter of Intent.

“I had a lot of different options from Memphis to Tulane to South Alabama. They were coming at me real hard, but ultimately, I chose UL because it feels like a family to me,” Davis said. “I was a priority for them, and they made that immediately clear just from me going over there with the guys. Everyone there knows who you are, and it feels really good. I’m excited to get to UL and continue my football career with them.”

Davis plans to study kinesiology/ sports medicine at the University of Louisiana. On the football team, his two main goals are to win Freshman Player of the Year for the conference and get more than 800 rushing yards.

“Basically, I want to show I am what UL thinks I’m going to be for them,” Davis said.

As he reflects on his time at Riverside Academy, Davis said the achievement he is most proud of is winning District during his senior season.

“Since I’ve been here, we had never won district, and to win it for the younger guys and for my senior class means a lot because we’ve been through a lot,” he said. “I hope those freshmen can continue to build on what we have done.”

Davis credits his family for helping him reach his full potential, from his parents who have pushed him to achieve to his sister who has been his biggest cheerleader. Even his aunts, uncles and extended family have played a major role in his success.