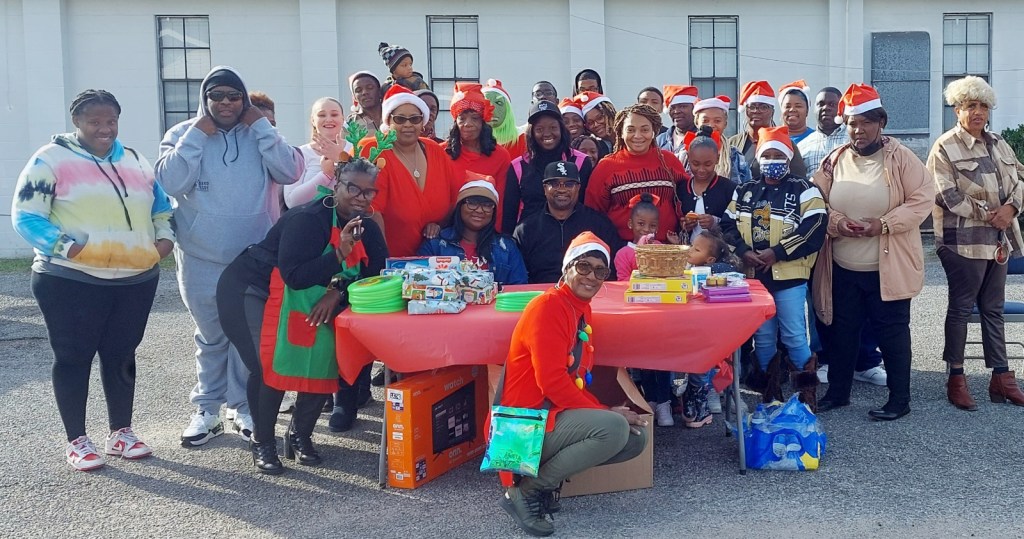 Volunteers from New Rescue Mission Baptist Church and the Mason Second Chance Nonprofit organization reached more than 200 children at the third annual toy and clothing giveaway in honor of RayQuan “The Champ” Mason. Organizer TaQuana Mason said it was a beautiful event.

RESERVE — Well over 200 children were blessed with toy and clothing donations during the third annual Christmas giveaway held in memory of RayQuan “The Champ” Mason.

This month, new and unwrapped toys for boys and girls ranging in age from newborns to 16 years old were collected at HHS Behavioral Healthcare in LaPlace and Quan’s Behavioral Health in Gray. The giveaway took place in a drive-thru format in Reserve on December 18 as the Mason Second Chance Nonprofit organization joined forces with New Rescue Mission Baptist Church.

An abundance of presents, raffles and Christmas carols by Gina Brown created a joyful atmosphere that perfectly captured RayQuan’s spirit.

Diagnosed with DiGeorge Syndrome, RayQuan passed away in July 2019 at the age of 24. During his time on Earth, he earned the nickname “the Champ” for his love of wrestling, bowling and skating. Most of all, he is remembered for his loving heart and willingness to give freely.

According to his mother, TaQuana Mason, RayQuan was known for sharing the lunches he brought to school, and he always wanted to stop and buy toys for children he spotted at the store.

The first toy drive in his honor was held specially for special needs children in 2019. During the COVID-19 pandemic, the giveaway expanded to reach a greater population of local children and included numerous door prizes.

At the same time, the Masons’ cousin, Pastor Devin Mason, was coordinating holiday charity events with the faithful congregation at New Rescue Mission Baptist Church in Reserve. Joining together has allowed for an even bigger impact during a time when many local families are faced with the aftermath of a challenging few years and the financial burden that comes with a changing economy.

“We did that in last year in the midst of the pandemic and the storm and everything else to bring some cheer and some joy, not only to the lives of the children in the parish, but to families as well who have dealt with the rebuilding. The church was also in partnership with Marathon in the purchasing of toys,” Pastor Mason said. “TaQuana is not only my cousin, but also a parishioner of the church as well, and she has a foundation in memory of her son. This year, we decided to bring it all together to just be a blessing.”

Volunteers approached each car during the drive-thru event to find out the ages of the children in the vehicle and distribute gifts accordingly. In addition to the free gift, each family also received raffle tickets. This year’s raffle prizes, conducted via Facebook Live following the distribution, included a smart TV and $50 gift cards.

New Rescue Mission Baptist Church is still recovering from Hurricane Ida, having only recently returned to the physical building on the first Sunday of November 2022. Members of the congregation have engaged in other charitable efforts this holiday season, including taking a trip to New Orleans last Saturday to distribute meals and blankets to more than 200 homeless individuals at three sites – Tchoupitoulas, the intersection of Calliope and Baronne, and a shelter on Gravier Street. Leftover blankets are being distributed to the VA Hospital and Twin Oaks Rehabilitation Center, according to Pastor Mason.

“It’s important with people going through so much at this time. Many of us are still trying to rebuild our homes and lives, with so many hardships and challenges still looming,” he said. “The church feels it’s necessary because part of our task and goal as a church is to be a light of darkness. In this season of giving and joy and peace, this should be a time the church should be most active to bring some positivity into the community.”