300 years of bonfires on the levee: Burning tradition endures test of time 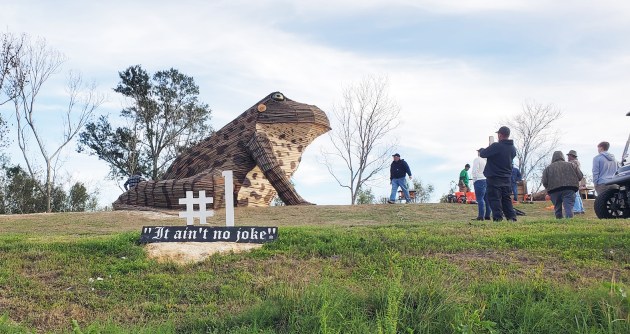 The earliest known photograph of Christmas Eve bonfires along the Mississippi River levee, a tradition more than 300 years strong in St. James and St. John the Baptist parishes, was taken near the site now known as Laura Plantation in 1871. Photo from Laura: Louisiana's Créole Heritage Site. 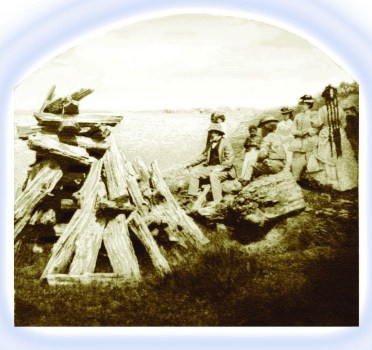 Members of the community walk to the top of the levee in Garyville to take photos of Blood, Sweat, and Bonfires’ 15-foot bullfrog, the latest in a more than decade-long series of custom-shaped bonfires that venture beyond the usual teepee blueprint.

LAPLACE — Bonfires have burned on top the Mississippi River levee each Christmas Eve in St. James and St. John the Baptist parishes for 300 years, but much about the origins of this celebrated tradition remains shrouded in mystery.

A number of stories passed down through the generations have attempted to explain the history of the bonfires, according to KiKi Mannear, communications and engagement senior manager for Louisiana’s River Parishes Tourist Commission.

“A holiday tradition older than any local can remember, it is speculated that bonfires on the levee were a celebratory practice brought over by the French-German settlers of Louisiana’s River Parishes in the early 1700s,” Mannear said. “Some say the enslaved built them at the end of the harvest season to celebrate. Still, others claim the fires were used to light the way for the faithful to attend the Midnight Mass. Ask any of the local kids, however, and they will tell you the bonfires light the way for Papa Nöel (Santa Claus) to find all the good boys and girls of the River Parishes.”

Back in the 1990s, Emily Chenet Guidry conducted interviews with some of the oldest residents living in the area for her piece, “Bonfires on The Levee: A Christmas Eve Tradition Along the River Road.”

Guidry’s research noted the presence of bonfires constructed in certain parts of Europe, the remnants of an ancient Celtic tradition dedicated to worshipping the sun during the summer and winter solstices. Communities reliant on farming believed the ceremonial fires would signal a faster return to spring and lengthen the summer season.

Bonfires took on a new religious significance with the advent of Christianity, with the summer fires burning in June to commemorate St. John the Baptist’s birthday. Meanwhile, the winter solstice bonfires turned into Christmas Eve bonfires.

Early settlers of the River Parishes, hailing from Germanic Europe, are believed to have carried over knowledge of summer and winter bonfires. Established in the early 1720s, “La Cote des Allemands” or “The German Coast” included initial settlements on the West Bank of the Mississippi River. In modern day St. John the Baptist Parish, settlers moved into the area now known as Lucy prior to claiming farming land on the East Bank in modern day Garyville and Reserve. The region was under a French regime through 1768, when Louisiana was delivered to the Spanish. Cajuns began arriving from Nova Scotia, mixing the French and German cultures.

Mentions of bonfires are missing from the historical texts of this time period, which may have led subsequent generations to come up with stories attempting to explain their origin.

The earliest known photo of the Christmas Eve bonfires was captured in 1871 on the levee in front of Laura Plantation, then known as Duparc Frères & Locoul Plantation, on the West Bank of St. James Parish.

Bonfires continue to line the levee in St. James and St. John parishes each year, while it is unknown if the fires ever reached down the river to neighboring St. Charles Parish, which is also considered part of the German Coast.

Today, the Festival of the Bonfires serves as the prelude to the Christmas Eve bonfires each year, featuring food, live entertainment, crafts, carnival rides, and the first two bonfire lightings of the season. This year’s festival was the 33rd annual event, observed December 9-11 in Lutcher.

According to Mannear, a majority of modern-day Christmas Eve bonfires are built in the traditional tee-pee style with a center pole anchoring the structure.

“Others come in different shapes and color schemes,” Mannear said. “Blood, Sweat, and Bonfires, known for its elaborate structures, has a massive 15-foot-tall bullfrog for this season.”

Bonfire lighting begins at 7 p.m. sharp on Christmas Eve, unless conditions are unfavorable. In the past, weather conditions have pushed lightings to New Year’s Eve.

Leading up to December 24, most bonfires are open for public viewing. Lawn chairs, blankets and ice chests can be brought along to enjoy the lightings.

According to the Blood, Sweat, and Bonfires builders, “Some bonfires offer food and other things, but it’s always safe to treat this event like a tailgate or Mardi Gras parade and bring what you may need.”

Mannear described the bonfire tradition as “one of the most published stories of Louisiana’s River Parishes,” drawing in thousands of attendees from around the world each year.
“The allure of experiencing something so different and spectacular brings in thousands of visitors per season to get a first-hand glimpse of the fires. Transportation companies even charter buses from neighboring cities, such as New Orleans, to drop off visitors to explore the fiery splendor,” she said. “Our hotels, eateries and attractions are bustling this time of year, as we welcome travelers from all over the globe to Louisiana’s River Parishes. Their experiences are shared with friends and family, making for new guests every year wanting a taste of our unique flavor, out here.”

More information on the tradition, including resources on how to build a bonfire, can be found on the Louisiana’s River Parishes website at https://lariverparishes.com/bonfirecountry/

Outside of Christmastime, there are currently two locations to view tributes to the iconic bonfires. The St. James Welcome Center offers a replica of the region’s famous bonfire structures, along with opportunities to learn about all of the activities and sights in Louisiana’s River Parishes.

Also open to sight-seers year-round is “Saint,” a massive wooden alligator created by Blood, Sweat, and Bonfires to serve as the official mascot of Bonfire Country. Located directly off of I-10 at exit 206 in LaPlace, Saint is over 50 feet in length and pays tribute to the creatures of the Louisiana swamp that inspire custom bonfires each holiday season.

Mannear teased that there are additional plans in the works to bring the bonfires to life year-round for locals and tourists alike.

“This plan is still being developed, though we hope to have more concrete information to share soon,” she said.