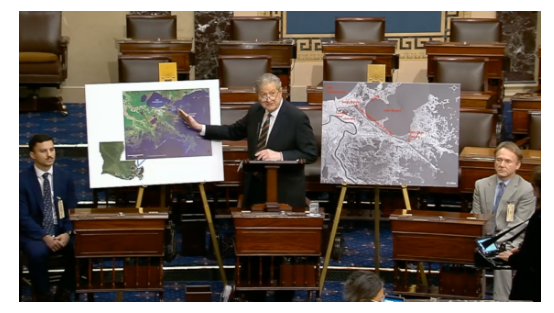 The MRGO destroyed over 600,000 acres of coast surrounding the Greater New Orleans area. It also allowed saltwater to flow from the Gulf of Mexico inland, destroying more than 27,000 acres of Louisiana’s wetlands, which functioned as a natural storm buffer that Louisianians rely on.

“We made a mistake building MRGO,” Kennedy said.

“In our Water Resources and Development Act, which this Senate just passed . . . we have, at long last, done something that I’ve been working on since I got here from day one . . . We authorized the Corps of Engineers to begin implementing the Mississippi River Gulf Outlet restoration plan . . . That means the Corps is going to fill it in and start repairing the wetlands and other ecological and environmental damage that was done when we built this channel. It will not cost the people of Louisiana one single penny.

The most recent estimated cost of the MRGO restoration was $3 billion in 2012. More damage to the wetlands and marshes has occurred since 2012, so the $3 billion estimate likely falls below the current cost to restore the area.