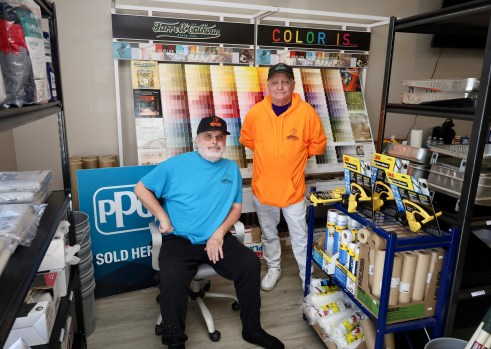 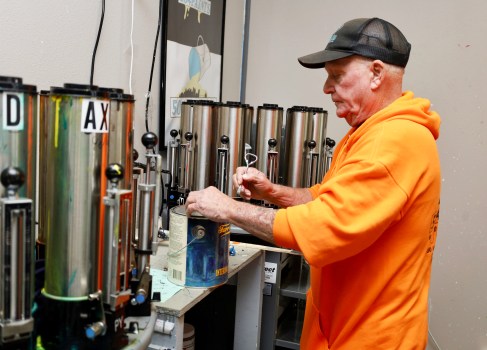 Poncho Gonzales Sr. opens a can of paint at 504 Paints in LaPlace. The store opened in late January 2022 and will soon celebrate a year in business.

504 Paints of the River Parishes will soon celebrate one year in business at 1900 U.S. 51 Ste. A in LaPlace. Located near Subway and El Paso, the new business has played a major role in helping the community recover from Hurricane Ida as families transform storm damaged houses into the homes they’ve always dream of.

504 Paints primarily sells Farrell-Calhoun and PPG brands, in addition to a wide range of painting supplies for projects of all sizes.

Brenda Robin was inspired to start the 504 Paints brand, which initially opened in Metairie in 2021. Her son, David Robin, said the original location received damage from Hurricane Ida, and the business was moved to LaPlace in early 2022.

“I knew a lot of guys from Shermin-Williams because I managed a store for almost 12 years and I had a good relationship with a lot of contractors, and they let me know about this space. Everyone has welcomed us with open arms. It almost feels like everyone knows each other, not just in LaPlace, but in surrounding areas like Lutcher and Gramercy,” Robin said. “We always wanted to do something local, more hometown-oriented. Some of the national circuits have crazy prices. They used to have that small town feel years ago and it unfortunately changed. We want to bring that back.”

Having experienced the devastation of Hurricane Katrina, team member Poncho Gonzales said 504 Paints is in tune with the needs of the community members who went through Ida. During the best and worst of times, 504 Paints is committed to providing quality service at fair prices. Unlike in big box stores, DIYers receive the same low pricing as contractors.  The team can often be found on the road, making deliveries to customers, even on weekends.

“Everything we do here is personable. The big box stores aren’t going to come out to your property and do a color match. We really take the time to answer customers’ questions,” Gonzales said. “Profit margins are not our main focus. Here, you are able to pay less for the same quality.”

According to Gonzales, 504 Paints has received positive feedback on the brands carried at the store. Farrell-Calhoun is more of a mom-and-pop brand, while PPG rivals Shermin-Williams and Benjamin Moore. Both were selected based on quality of coverage.

504 Paints also hopes to be a positive presence in LaPlace. The staff has set up crab and shrimp boils in the parking lot to feed the contractors who have supported the store since its opening. Gonzales also hopes to introduce a blessing box to reach individuals in need.