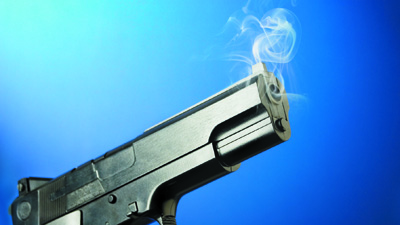 DENVER – The United States Attorney’s Office for the District of Colorado, the ATF and the Denver Police Department, are joining forces to raise awareness about gun violence that is taking innocent lives. Illegally owned, privately made firearms or “ghost guns” are part of the problem. “Ghost guns” are guns that do not have serial numbers, making them harder to trace if used in a crime.  These guns are often purchased without a background check, even though such purchases are illegal. “Untraceable firearms are being used to commit crimes. People who wouldn’t otherwise be able to get a gun because of their age or background, are getting ahold of these weapons,” said ATF Special Agent in Charge David S. Booth. The Department of Justice reports 45-thousand privately made firearms are known, including 692 guns linked to murder or attempted homicide investigations. One defendant is warning others about the dangers of getting caught up in this criminal activity.

Saul Ramirez Escobedo used to build ghost guns. Escobedo said a close relative recruited him to buy parts, make the weapons, and sell them. Escobedo said, “When COVID hit, my job slowed down a lot. I was struggling to pay my bills. He taught me how to build firearms. You construct your own firearm, you go out, shoot it, it works. I’ve never been in trouble with the law before. Never done this kind of stuff before. The way he explained it to me, you won’t get in trouble. It was more cause like it was cheaper selling it from outside than going to the store and going through the whole process.” But Escobedo did get in trouble. He was arrested and pleaded guilty in federal court to conspiracy to deal firearms without a license. Escobedo received leniency for his willingness to accept responsibility and Judge Christine M. Arguello sentenced Escobedo to four years of probation, and he is now a convicted felon. “Right now, you look at the media, there’s a lot of killings going on, you see a lot of people shooting each other, mass killings and stuff. I started looking into that and thought, ‘man that could be one of the guns I put out on the streets’, and it’s really scary,” Escobedo said.

Co-defendant, Luis Daniel Marquez, pleaded guilty to conspiracy to deal firearms without a license and possession with intent to distribute methamphetamine. Judge Arguello sentenced Marquez to 90 months in federal prison.

Denver Police Chief Ron Thomas said, “In Denver, it is illegal to possess or manufacture non serialized firearms. And the Denver Police Department is committed to recovering illegal guns, to include ghost guns, to keep people safe and prevent gun violence in our community.“

Dealing firearms without a license is illegal. Call the ATF at 888-ATF-TIPS to report illegal firearms activity.

Ghost Gun PSA “In His Own Words”

This public service announcement is part of Project Safe Neighborhoods (PSN), a program bringing together all levels of law enforcement and the communities they serve to reduce violent crime and gun violence, and to make our neighborhoods safer for everyone. On May 26, 2021, the Department launched a violent crime reduction strategy strengthening PSN based on these core principles: fostering trust and legitimacy in our communities, supporting community-based organizations that help prevent violence from occurring in the first place, setting focused and strategic enforcement priorities, and measuring the results.

On April 11, 2022, the Attorney General signed ATF final rule, Definition of “Frame or Receiver” and Identification of Firearms, which modernizes the definition of a firearm. This rule went into effect late this summer and clarifies that parts kits that are readily convertible to firearms are subject to the same regulations as traditional firearms. These regulatory updates will help curb the proliferation of “ghost guns,” which are often assembled from kits, do not contain serial numbers, and are sold without background checks, making them difficult to trace and easy to acquire by criminals. More information can be found here: ATF Definition of “Frame or Receiver” and Identification of Firearms