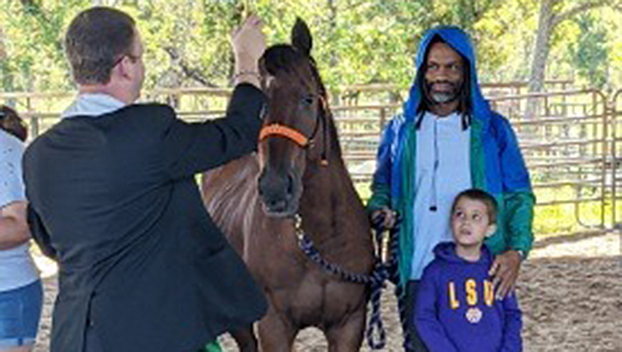 LAPLACE — Squall lines of tornadic weather seemed to have mostly spared St. John the Baptist Parish Wednesday, but for the Greater New Orleans Therapeutic Riding Center in LaPlace, the impacts of this week’s inclement weather were immeasurable.

Olivia had been with the Greater New Orleans Therapeutic Riding Center since her previous owner’s property went underwater during the Great Floods of 2016.

“Since GNOTRC was on its August break, we could temporarily house her three horses. When the owner came to retrieve them, she asked about the need for any therapy horses and offered Olivia,” Hefler recalled.

Olivia was once a Pony Club horse and a 4H horse, and she had always worked well with children, making her a perfect fit for helping children with special needs through GNOTRC. While she needed some additional training for her new job, she adapted well, and her small stature made her less intimidating to the younger riders.

Olivia was among the horses that rode out Hurricane Ida. According to Hefler, when significant wind or rain events are expected, it’s always recommended that horses be turned out into the field. Although many trees on the property were downed during Hurricane Ida in 2021, all of the therapy horses survived the storm without a scratch on them or even a hair out of place.

Hefler expected the same would be true Wednesday as severe weather moved into the area, closing local schools and government offices.

“We heard on radio and TV that there was tornadic activity in Killona, moving across the river between Highway 51 and Montz, which ended up at Montz. We also heard there was activity on Jaubert Lane (in LaPlace), which is approximately directly across Airline from us,” Hefler said. “At about 3 o’clock, we had a massive lightning strike hit the farm, which turned out to be the one to hit and kill our therapy horse Olivia.”

The line of storms also left several trees down and ripped a phone line that became wrapped around several of GNOTRC’s structures. Several smaller items that weren’t secured ahead of time were blown out of place, but Hefler said all of the physical damage was minor in comparison to losing Olivia.

Horse trainer Kate Brower was especially affected by the loss. After Hurricane Ida, Olivia had become nervous to leave the comfort of her herd, and Brower spent many hours with her tooling around the pastures, toward and away from her friends, among cows and trees and peeking into ditches.

“She was always the most flexible little thing, and we could turn around in an aisle! We worked through her emotional trauma together, and when we could ride barebacked and bridle-less throughout the whole farm, I pronounced her cured,” Brower said. “She loved liberty and picked it up naturally. It’s particularly bitter to me to lose her in a storm, after she so amazingly conquered the fear that was burned into her by a previous storm.”

Hailed as the “best kept secret in LaPlace,” the Greater New Orleans Therapeutic Riding Center is a nonprofit organization that uses horseback riding as a means of helping children and adults with physical, emotional and learning disabilities. The farm is located at 152 Shadowbrook Lane off of Airline Highway.