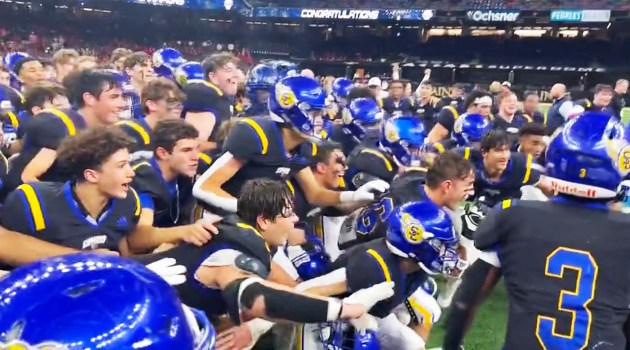 The St. Charles Catholic Comets storm the field of the Ceasars Superdome after Friday’s big championship win against Dunham. 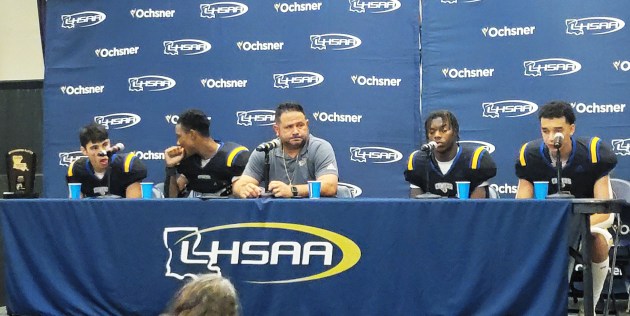 Coach Wayne Stein and members of the St. Charles Catholic football team sit down for interviews after defending the state championship title.

NEW ORLEANS — The St. Charles Catholic Comets found themselves playing for the LHSAA Championship once again on Friday as they took on the Dunham Tigers.

This is the Comets’ fourth time in four years playing for the championship, only this year it was a new opponent. The Comets were also in a different position as this year they were defending the championship instead of trying to take it.

For head coach Wayne Stein, it was two for two: the second time in his two years since replacing the legendary Coach Frank Monica.  As expected, the Comets and the Tigers faced off fiercely in the first half as Dunham took the lead with a 52-yard touchdown by Boldt, which made the score 7-0. The Comets answered back with a 23-yard touchdown by Davon Sturgis to make the score 7-7. But Dunham came for a fight and a fight they surely gave as Comeaux scored a 62-yard touchdown which ended the first quarter with Dunham in the lead 14-7.

The second quarter was an even harder fight between defenses as the Comets scored to make the game tied again 14-14, and this is how it would stay until halftime. This game was truly a dogfight and coming into the third quarter, Dunham’s Jackson House scored a nine-yard touchdown to put Dunham back in the lead with 21-14. The Comets would come up the field to score, only this time it was a field goal, which made the score 21-17.

Duhnam’s defense made it very difficult for the Comets as they tried to keep up with the Tigers scoring, but the Tigers defense kept stopping them at all ends. Then with 1:21 left in the third, Dunham scored another touchdown, pulling away from the Comets and ending the third quarter with a score of 28-17. The fourth quarter was very intense as the Comets scored early with a touchdown and a two-point conversion that put the Comets only a field goal away from Dunham as the score was 28-25. However, Dunham was still ahead. The Comets continued to fight as they marched down the field and scored again to take the lead from Dunham, which made the score 32-28. The Tigers fought to the very end, but the Comets prevailed.

The Comets made a repeat to be the LHSAA Division III Select Champions twice in two years and Coach Stein was incredibly joyous. After dealing with adversity this year and coming out on top, Coach Stein stated, “It feels great! We played a really good football team…They thought they played their hearts out. I thought they outplayed us for a large part of the game. I’m proud of our kids to hang in there, you know.”